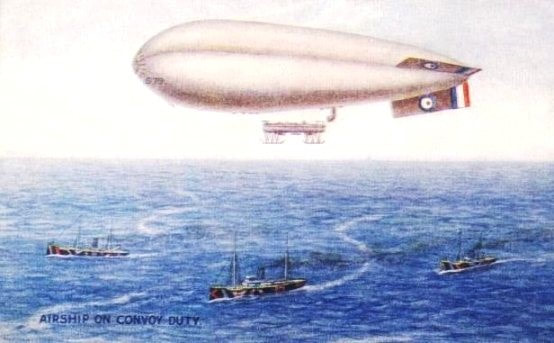 ​Situated in the Parish of St.Ola to the West of Kirkwall, Caldale Camp was built as an airship station during WW1 sometime between 1915 and 1916 and was first commissioned with the Royal Naval Air Service in July 1916. 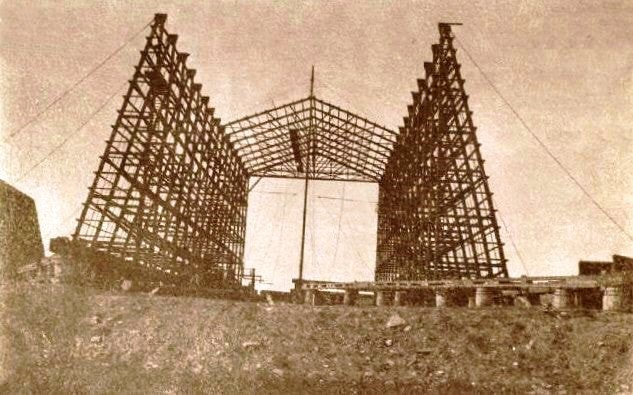 ​Above: One of the Airship sheds/hangers under construction, this is one of a set of photographs recently found and loaned to ARGOS.  Photo:   Jim Eunson Collection. 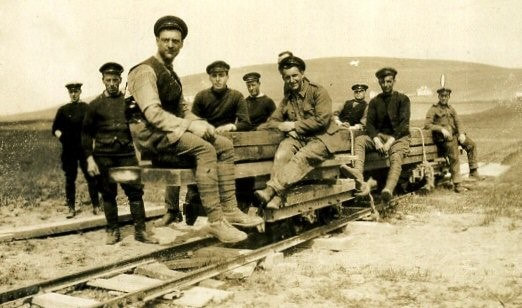 ​Above:  Another fantastic shot recently discovered by Jim Eunson of workers transporting timber on  railtrucks to the site at Caldale for building the large airship hangers. Photo: Jim Eunson Collection. 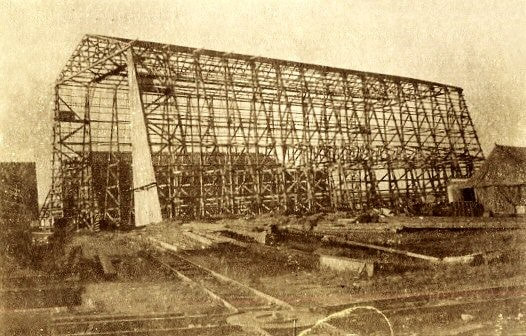 ​Above:  A side view of one of the large airship hangers under construction around 1916. Photo: Jim Eunson Collection. 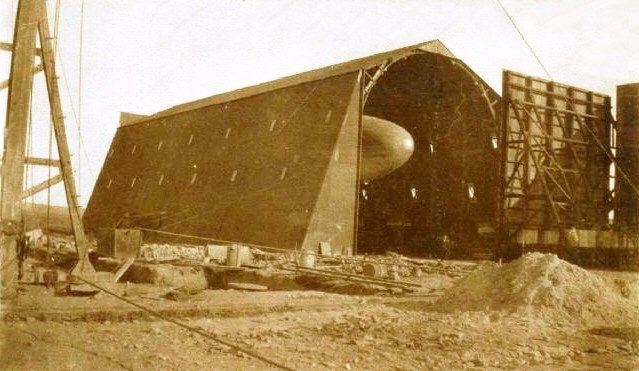 ​Above:  Another fantastic photo of one of the airships in the shed, surrounded by building materials it is obvious that the shed was only recently finished.  Photo:  Jim Eunson Collection. 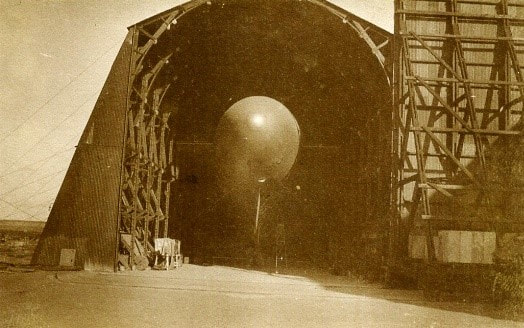 Airship in shed ​Photo:  Jim Eunson Collection.
​The Airship Station was equipped with 4  Sea Scout Pusher or Submarine Scout Pusher, non-rigid airships or SSPs,(Pusher comes from the fact the engine is at the back and pushes balloon along) and an array of kite balloons which were towed behind ships and used to spot enemy activity & U Boats from the air by means of a lookout suspended in a basket..


The SSPs were manned by 2-3 crew and carried wireless telegraphy equipment and 160lbs of bombs, and a Lewis Gun. They carried fuel for 8 hours flying in two fuel tanks.


There was a maintenance camp and living quarters for the 200 men working on the base. 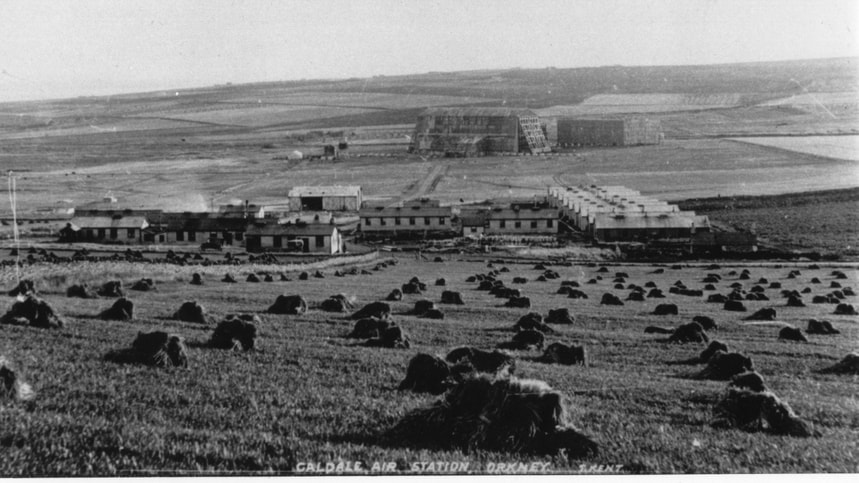 ​Above:  This photo shows the camp accommodation huts with the large shed behind.   Photo: From a postcard by Tom Kent. 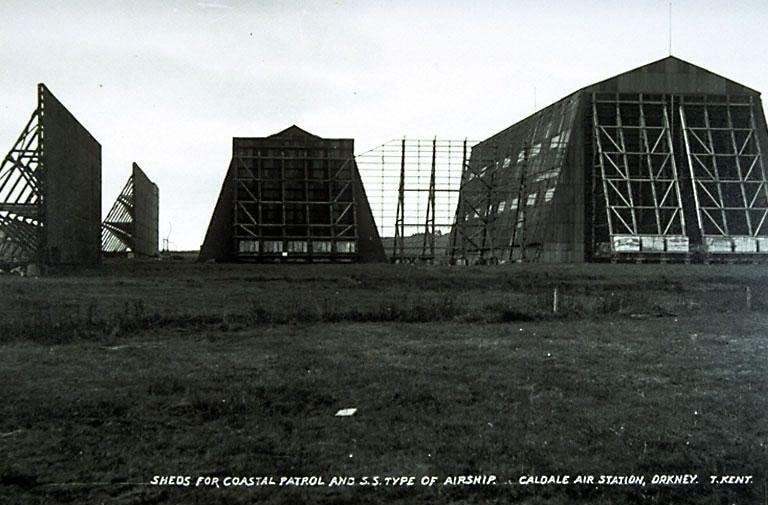 ​Above:  Great photo showing the two airship sheds and draught walls.  Photo:  From a postcard by Tom Kent. 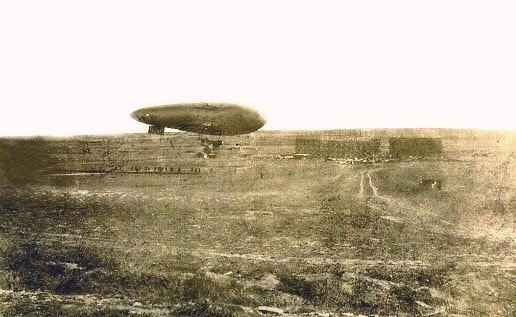 ​Above: Airship & Hangers at Caldale, men can be seen holding down lines.  Photo: Jim Eunson Collection. 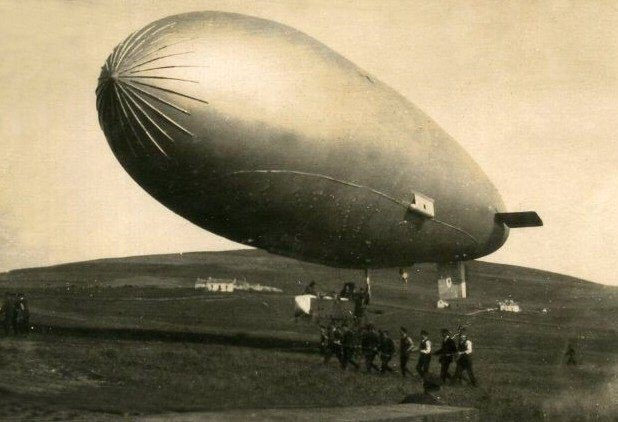 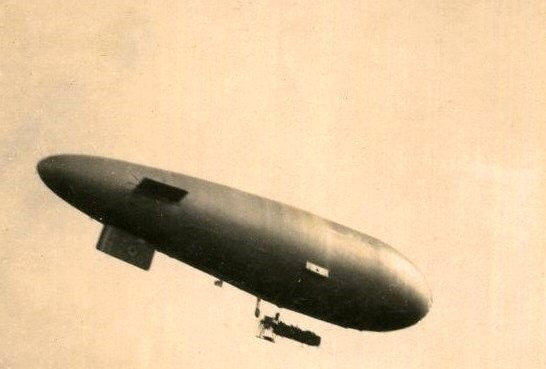 ​Above:  Another shot of the airship as she takes to the air.  This is probably SSP2 or SSP4 which incidentally were both lost in accidents off Westray in November and December 1917 (see below).  Photo:  Jim Eunson  Collection. 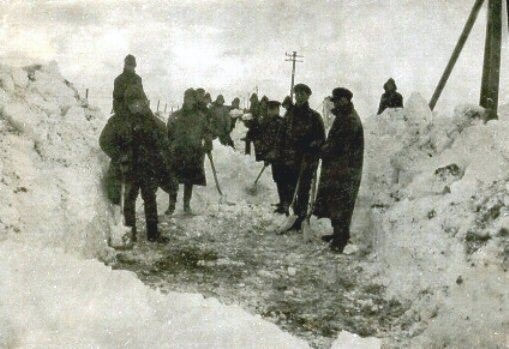 ​Above:  Clearing snow at Caldale, thought to be Winter 1915.   Photo: Jim Eunson Collection. 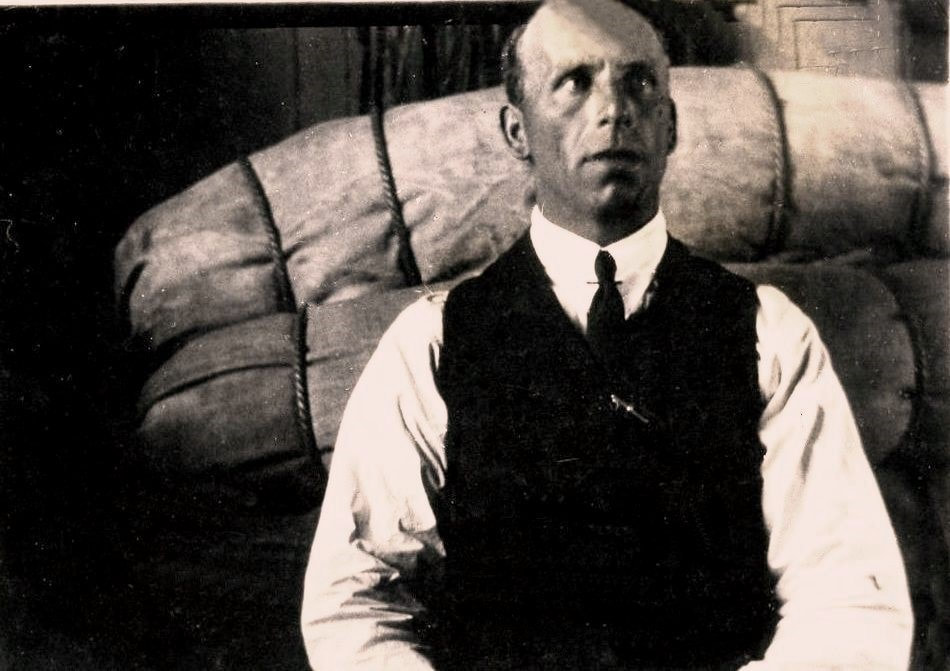 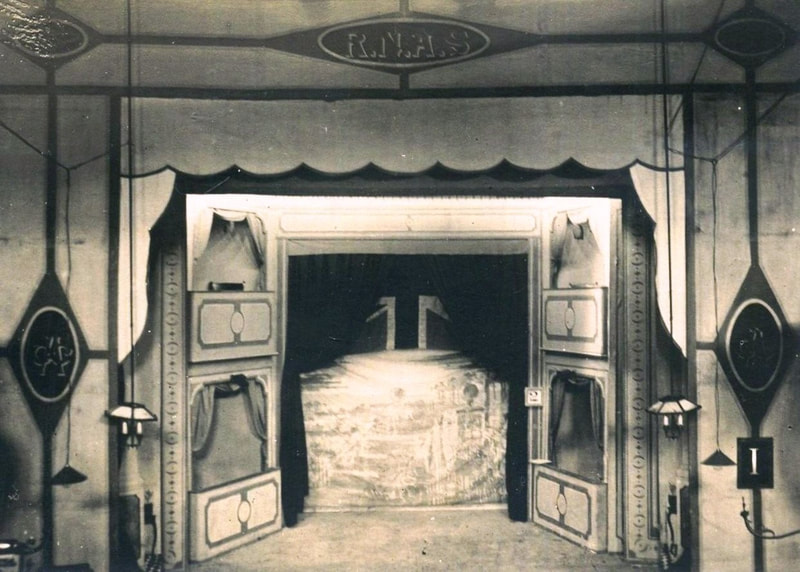 ​Above:   Left:  A man at Caldale who appears to be in the maintenance shed as a deflated balloon can be seen behind him, so far he has not been identified.   Right:  A shot of a theatre at Caldale with RNAS at the top and CAC to each side on wall plaques.  Both photos and others on this website have been recently discovered in a photo album found in the South of England. Many thanks to the contributor for loaning them to us for the website.  Photo: Jim Eunson Collection.
AIRSHIP & BALLOON MOORING BLOCK 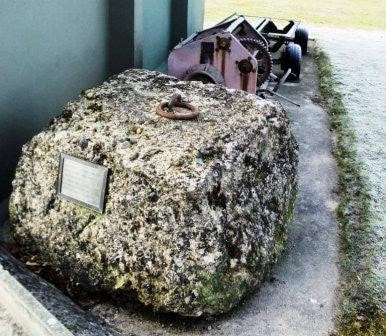 ​Above: This is a concrete mooring block for the airships and balloons, this particular one was seen at the Yorkshire Air Museum at former RAF Elvington, but is typical of the type used across Britain in both wars.   Photo:  Dave Earl.
The SSP Airships

​The SSP  ( Submarine Scout Pusher) airship was developed in early 1917 following the success of the Maurice Farman type using a re designed car with a rear mounted 75 hp Rolls Royce engine giving a top speed of 52 mph. These engines were later changed for 100 hp Green engines. The Car was rectangular, 25 foot long with a rounded nose and took a crew of three and on the bottom was a single landing skid. The 143.5 foot long envelope of the airship had a capacity of 70,000 cubic feet. Only six SSP airships were ever built.

For more information on Airships, their history and part in the war please visit the site of the Airship Heritage Trust at :www.aht.ndirect.co.uk/

The loss of the Airships SSP 2 and SSP 4


Airship SSP 2 left Caldale for operations to the north of the Orkney Islands at 08.50 on the morning of 26th November 1917. The weather on the day was considered favourable.


By 10.00 the winds had freshened and the Airship, which was 17 miles NNW of the base sent a radio message saying she was intending to return to base and giving an ETA of 10.30. Ft Lt Devereux brought SSP 2 down to 200 feet hoping to find lighter winds. Things appear to be going ok with regular messages being sent back to base, one at 10.30 giving a new ETA of 11.30 and an update saying wind had increased to 30 knots. At 11.20  the SSP 2 reported engine failure and was going to make a free balloon landing in the sea to the NE of Papa Westray and requested assistance.


HMS Leopard and several drifters were patrolling in the area and at 11.40 a lookout on HMS Leopard reports seeing an Airship land on the sea then explode. Despite a search which went well on into the evening nothing of the crew or airship was found.


'' No satisfactory explanation can be given for the failure of the engine, as it was running perfectly when the airship left the ground. There was seven hours petrol at full speed on board. I consider that the envelope burst due to an excessive strain being brought on it by the suspensions, when the car hit the water. The envelope then probably collapsed on the car jamming the crew in their seats, and the whole ship sinking almost immediately.'' 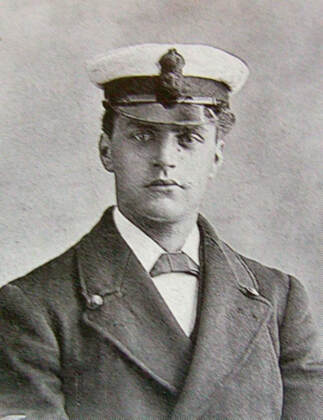 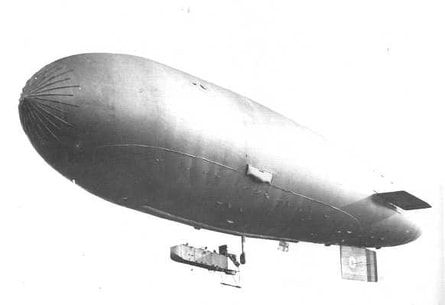 
At 17.00 on the 21st December 1917 the airship SSP 4 left Caldale for anti submarine patrol of the north of the Orkney Isles. The night had a full moon and weather reported as ''favourable''  and it was hoped the airship may catch a U boat by surprise on the surface. The crew for this flight were:


By 17.45 the wind and increased with snow showers and at 17.50 SSP 4 reported that she would be returning to base due to heavy snow. At Caldale the base and hanger lights were turned on to await the airships return.At 18.10 a message was received from SSP 4 requesting information on wind strength and direction which was then given as ''wind WSW, 15 to 20 knots''. At 18.20 a message from SSP 4 asking for a destroyer to be sent to 72K and use searchlight.


18.50 and another request from SSP 4 for weather conditions at base. SSP 4 was told that destroyer had been sent to the position 72K grid square on chart and was asked if they were having difficulties.


SSP 4 then started having communication problems with base and not receiving messages with Caldale although Caldale could hear SSP 4 loud and clear. SSP 4 started communicating through Peterhead.


19.25 message sent saying SSP 4   '' Making no headway, ask Destroyers to search east of Orkney'' It seems now SSP 4 was lost and needing to get a position fix. Both Copinsay and Auskerry lighthouses were lit and destroyers and patrol boats sent out.


SSP 4 the asked Peterhead for a radio fix bearing, ''Bearing from Peterhead 355, no fix obtained''


The lights and flares at Caldale were then put out as it was thought the airship would not arrive back for some hours.


At 21.10 a message was intercepted from SSP 4 to HMS Campania '' Despatch destroyer at full speed with searchlight to bearing 355 from Peterhead''


At this time Caldale had restored full communication with SSP 4 and the wireless operator said the airship could be no more than 20 miles away from the base.


A message was sent to SSP 4 saying Old Head w/t station was looking for bearing but this message was not acknowledged, in fact SSP 4 never acknowledged any further messages but did continue to transmit messages requesting wind speed and direction information.

Nothing more was heard from the airship and at 01.00 the lights at Caldale were turned off as the airship was known only to have enough fuel to last until midnight.


Next morning the wreck of SSP 4 was found at Tafts on the south shore of Westray but there was no sign of the crew. The confidential papers, charts, a boot, leather jacket and a glove were found still on board. The airship was salvaged and returned to Caldale where a court of enquiry found that the switch was still in the contact position and the throttle still set at full forward and the propeller was very badly damaged so it is thought the SSP 4 hit the water while the engine was still running. The crew may have abandoned the ship thinking it would sink. None of the crew were ever found. 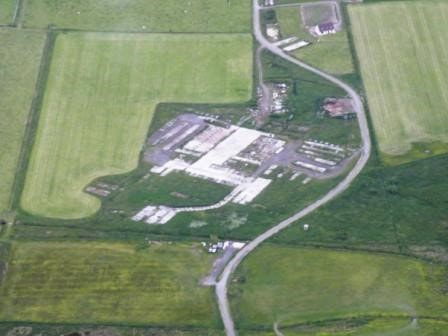 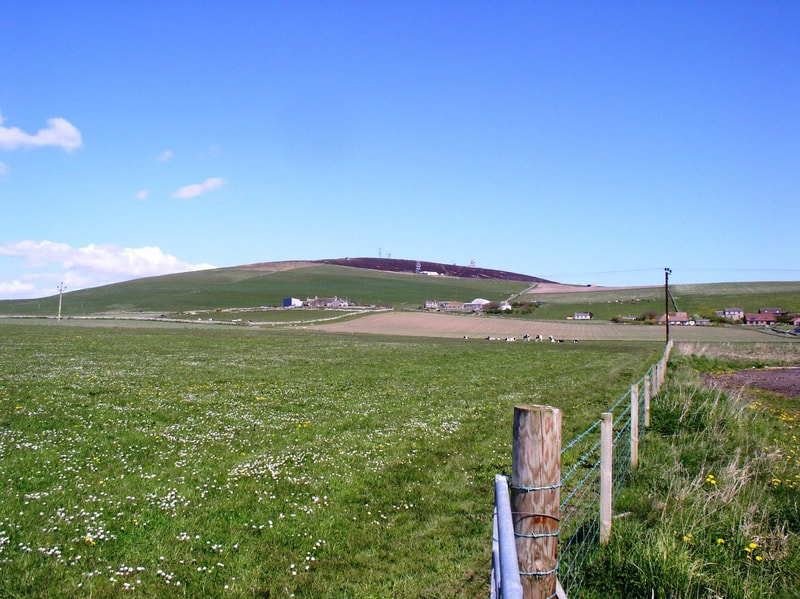 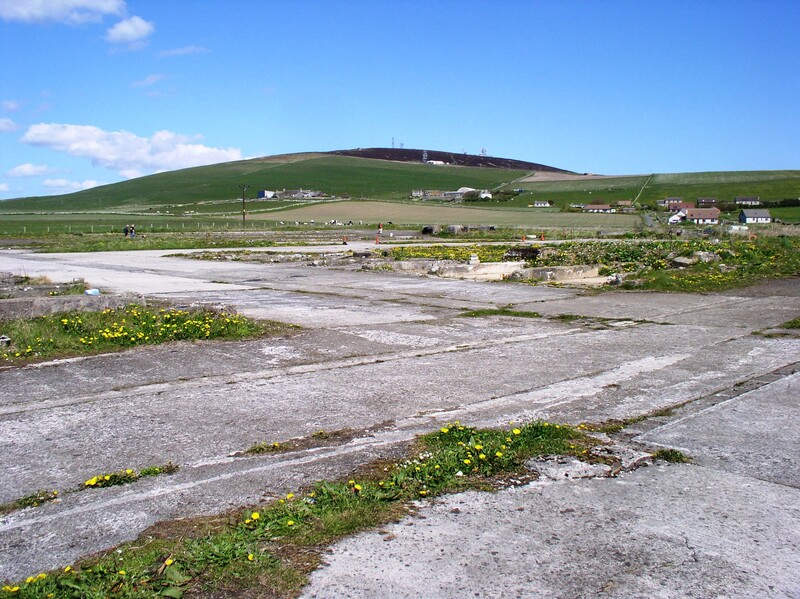 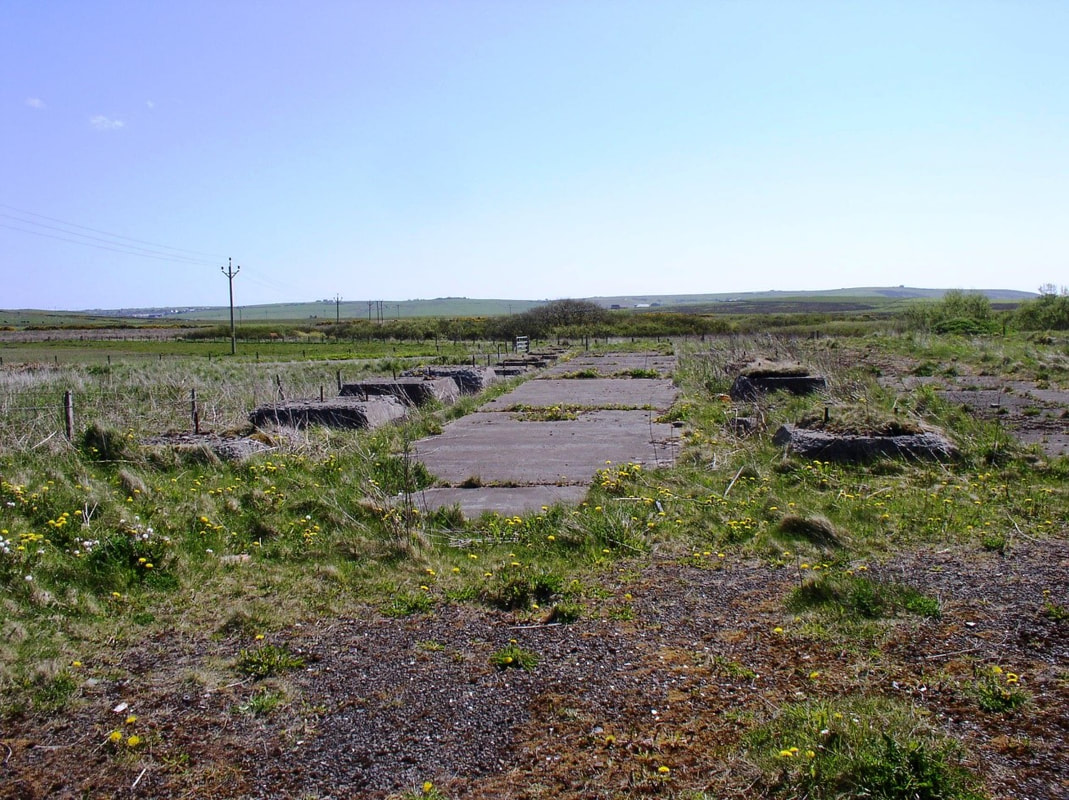 ​Above:  Concrete foundation for what we believe was one of the draught walls which stood next to main airship hanger.  Photo:  Dave Earl. 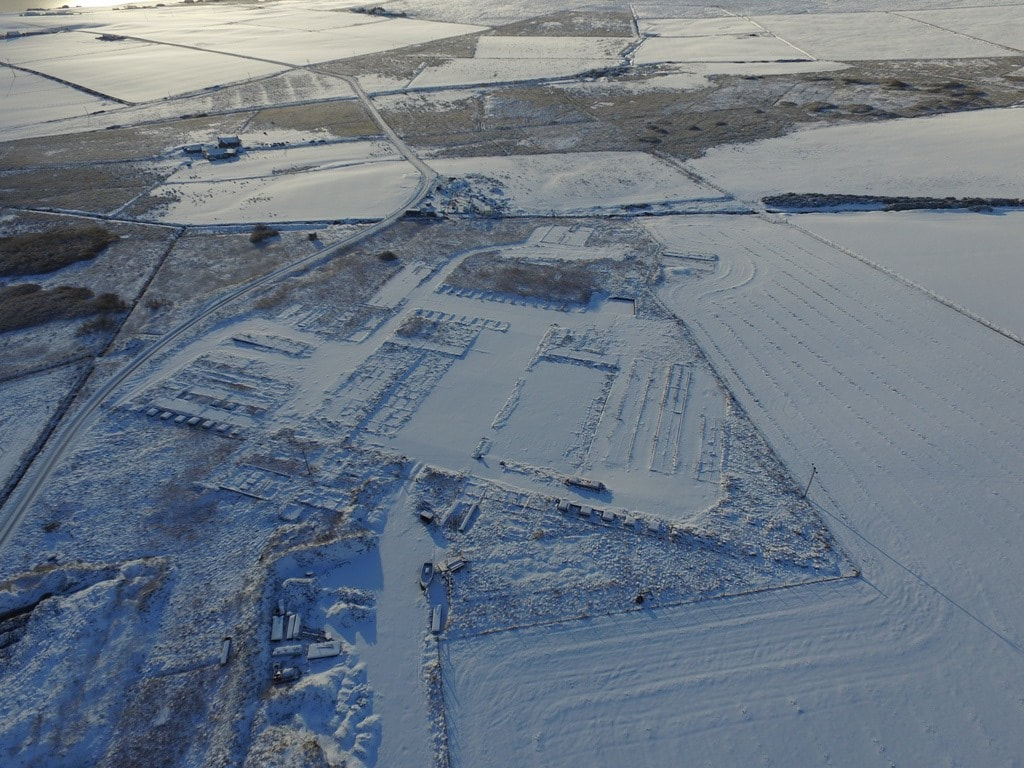 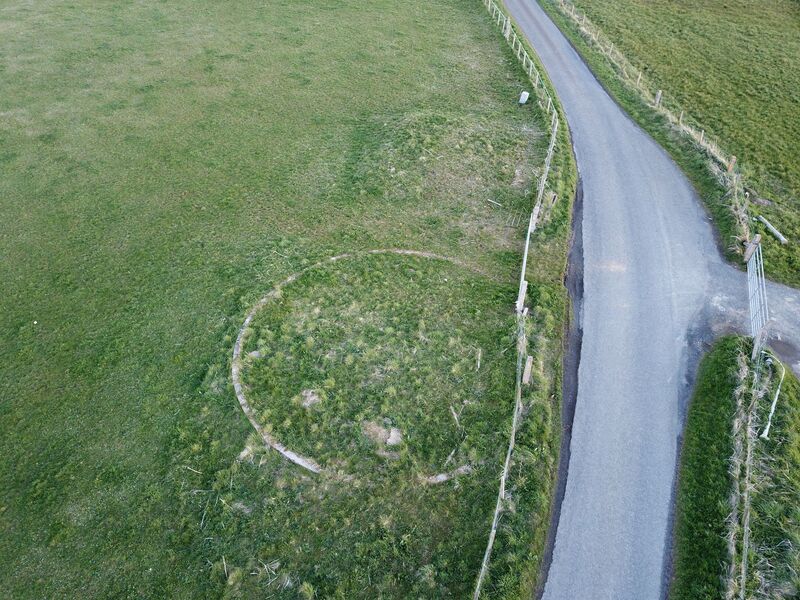