​In recent times a number of memorials and monuments have been erected to commemorate tragedies or flying achievements, here are some of those found so far, if anyone knows of others and would like to contribute photos they would be most welcome. 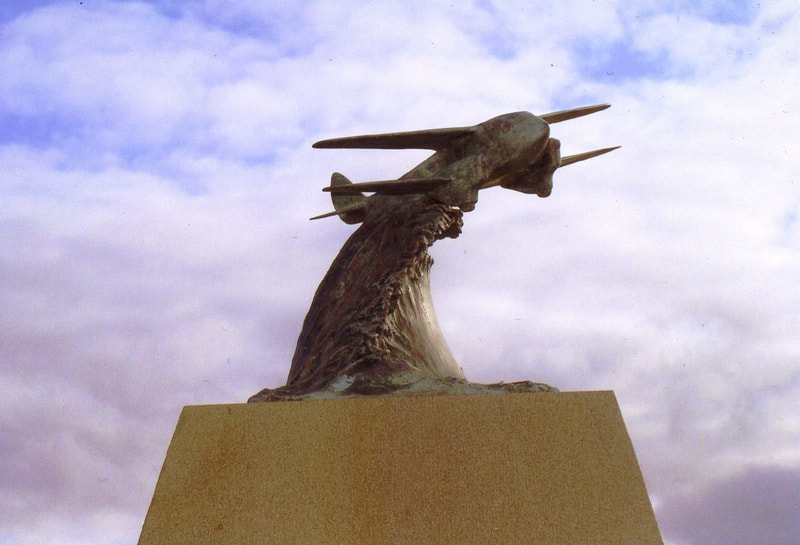 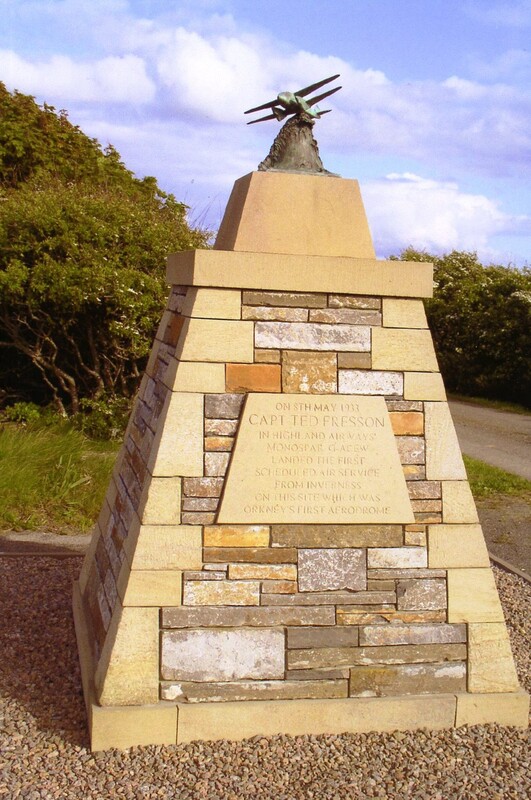 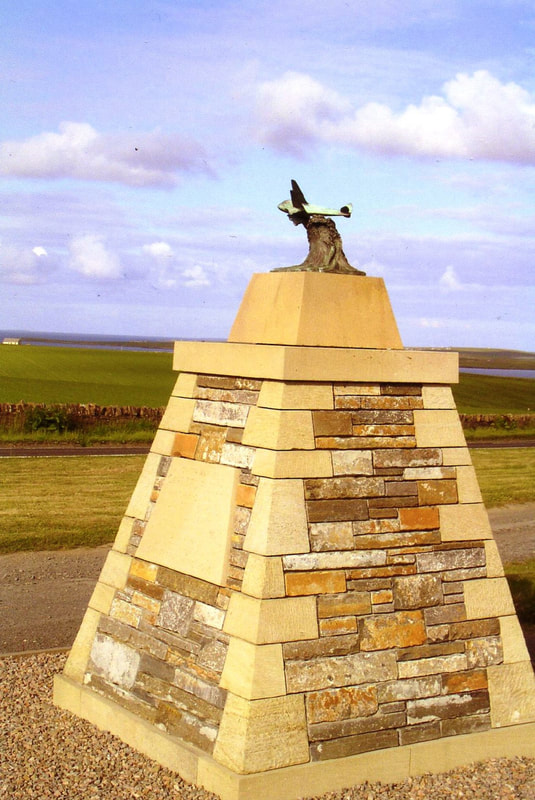 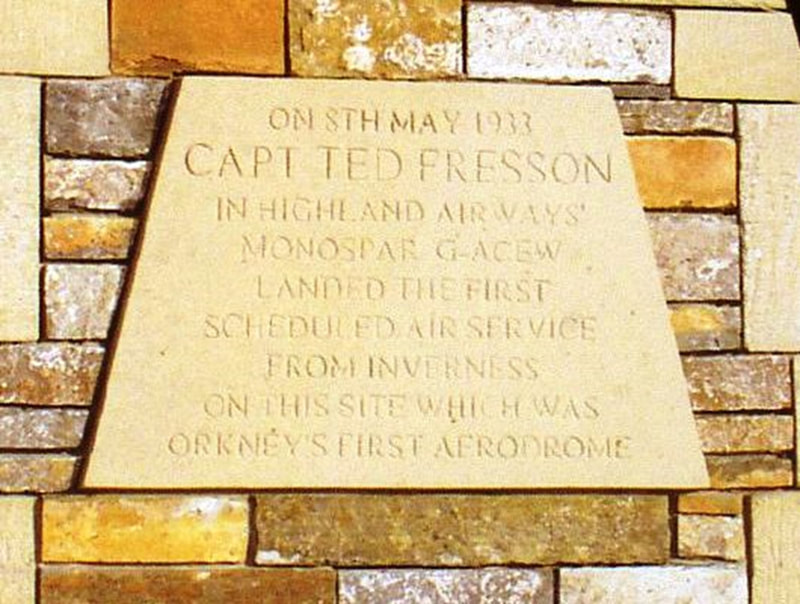 Above: A very impressive monument to Ted Fresson the Aviation Pioneer who made the first successful scheduled passenger service landing at Kirkwall in 1933. A monument originally stood  at the entrance of the airport but was moved when the airport was refurbished to a spot on the side of the A960 close by the airport.  Photos:  Dave Earl.
THE HATSTON MEMORIAL
​ 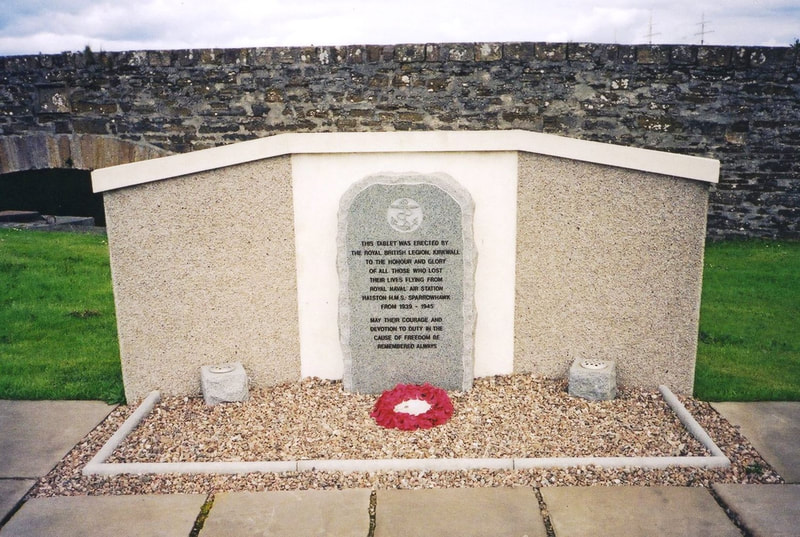 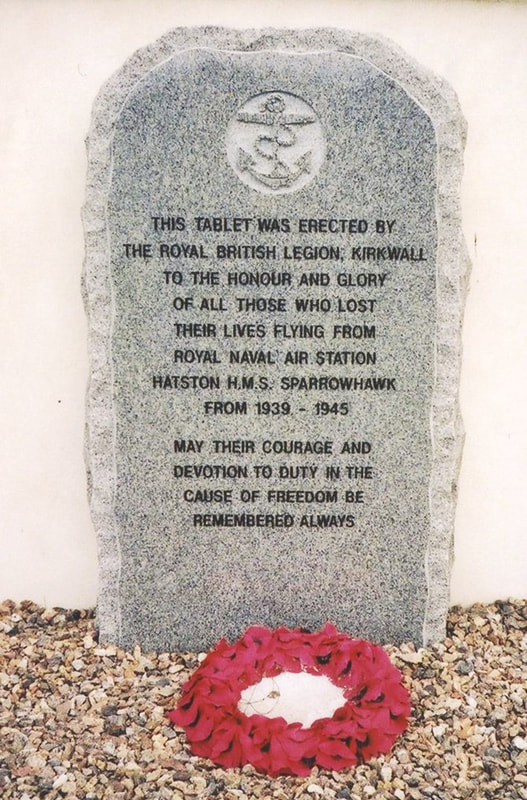 ​This memorial erected by the Royal British Legion is to be found at the junction roundabout of Grainshore Road and Ayre Road on the way into Kirkwall from the A965.  Photos: Dave Earl.
LYNESS, HOY
​ 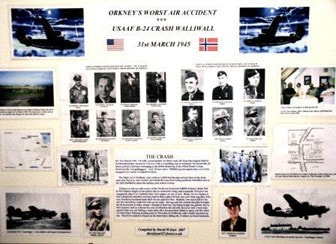 ​A Memorial in the Scapa Flow Museum at Lyness arranged by Dave Earl for the crew & passengers of the B-24 Liberator which crashed at Walliwall, Orkney Mainland on 31st March 1945.   Photo:  Dave Earl.
CMDR  EDWIN H.DUNNING RNAS MEMORIAL
​
​A memorial stone in memory of Squadron Commander Edwin H Dunning DSC of the Royal Naval Air Service, can be found by the old pier wall in Swanbister Bay,near Orphir, this was erected in the early 1990s as a tribute to Dunning who lost his life while attempting to make a moving carrier landing in Scapa Flow, a pioneering event (See our Orkney Early Aviation page for more details), also there is a clip on our Video page of this tragic accident in 1917. 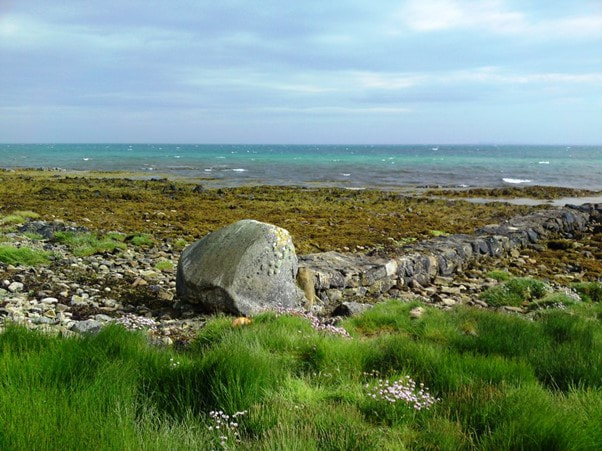 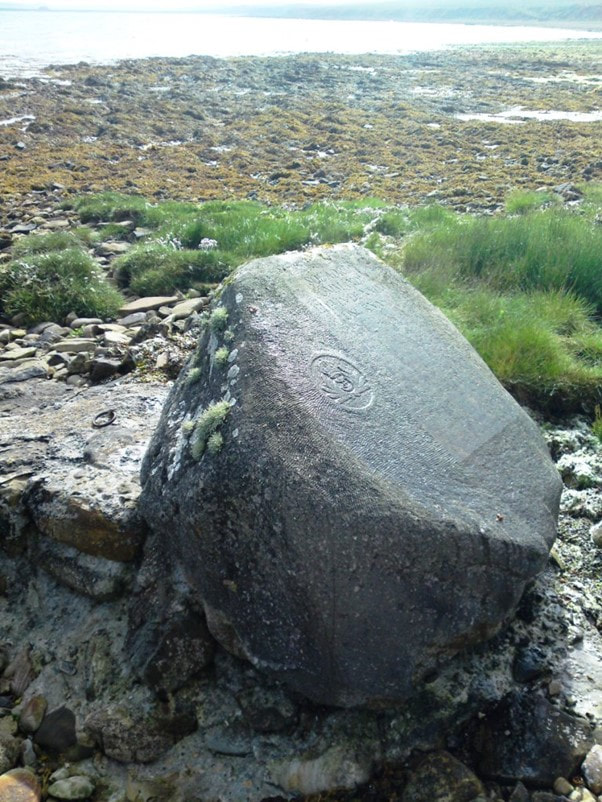 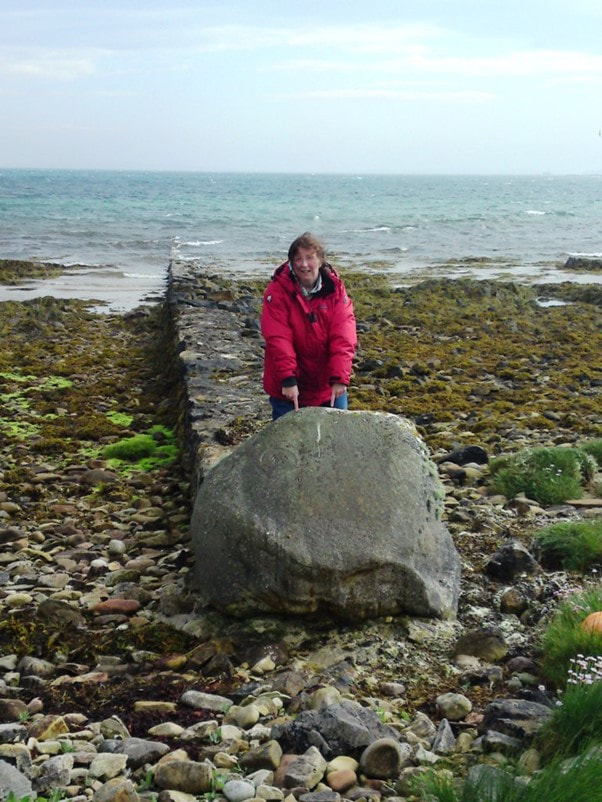 Commander Dunning`s memorial stone at Swanbister Bay.  Joyce Gray with the Dunning memorial in June 2010, a close up of the stone on which the inscription now barely legible was carved. It is hoped that in the near future this can be restored, though the elements here present a problem.

Photos: Scapa Flow Landscape Partnership Scheme.
​Note:  If anyone has photos taken when this memorial was dedicated we would be more than happy to add them here. Thanks!
SHETLAND
​
MOSQUITO MEMORIAL - ROYL FIELD HILL 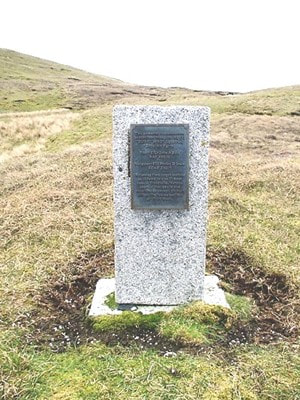 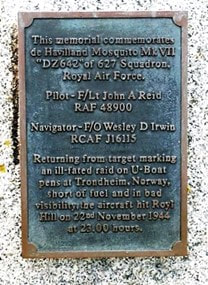 ​Above:  A stone pillar and bronze plaque close to the wreckage on Royl Field Hill,Shetland, for the Mosquito crew killed returning from Ops to Norway in 1944.  Photo: Dave Earl.
AIR AMBULANCE MEMORIAL NEAR TINGWALL.
​ 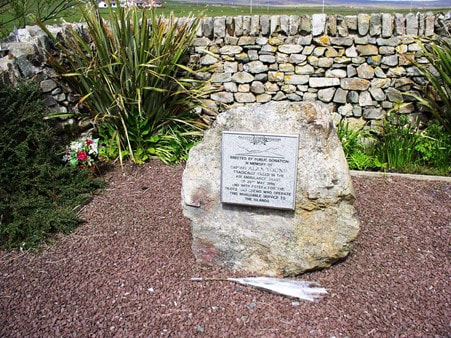 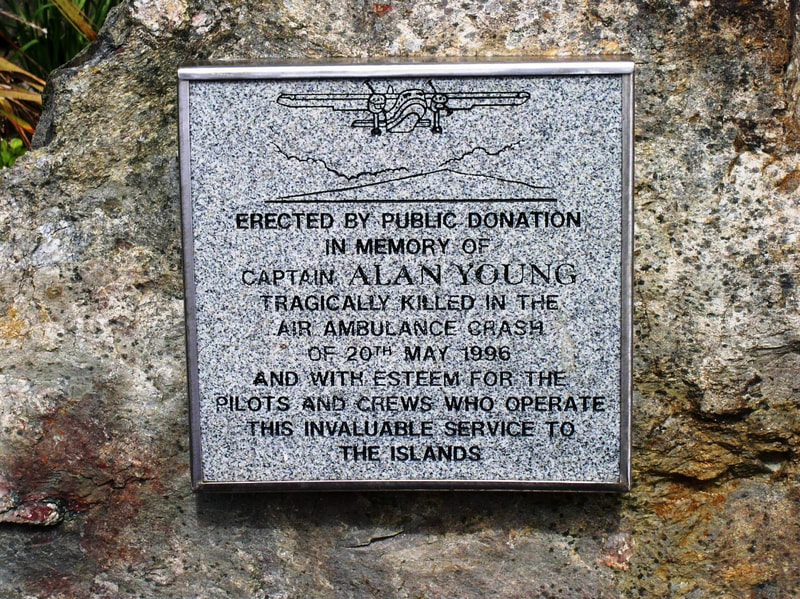 ​Above:  In a layby near Tingwall is a memorial to the Air Ambulance pilot Capt Alan Young who was killed trying to land his Islander at the airfield in bad weather on 20th May 1996. Photo: Dave Earl.
HALIFAX BOMBER MEMORIAL FITFUL HEAD.
​ 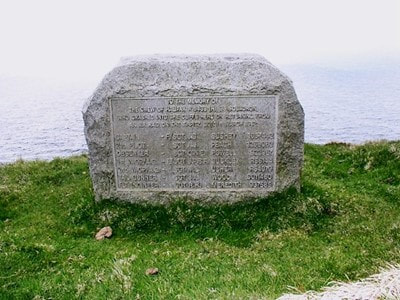 ​Above :  Memorial for the crew of a Halifax bomber that crashed into the cliff at Fitful Head returning from an attempted raid on the battleship Tirpitz.  Photos: Dave Earl.
​CATALINA FLYING BOAT MEMORIAL - YELL,SHETLAND. 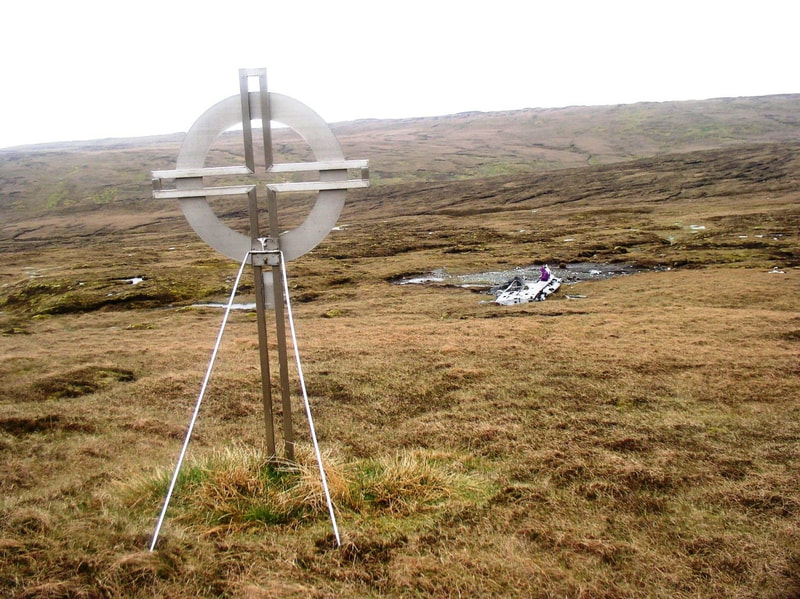 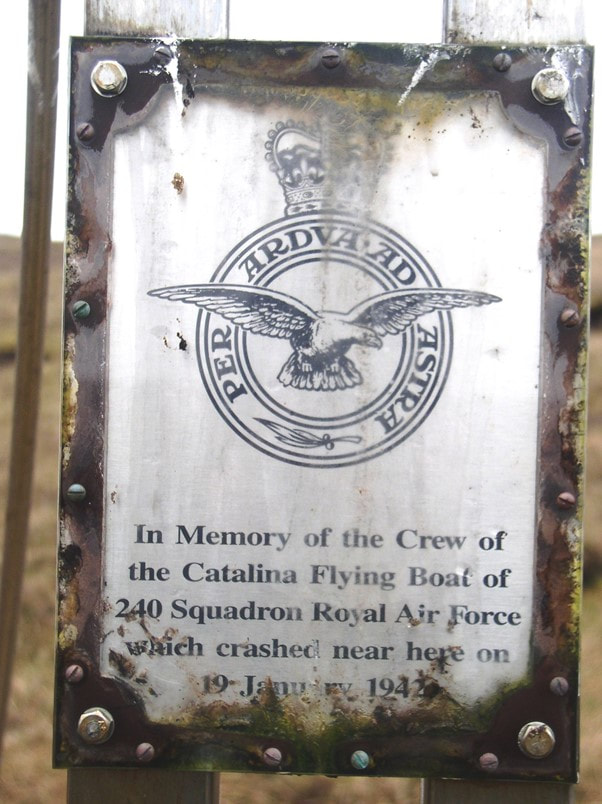 ​The 9 foot high stainless steel Celtic Cross erected at the crash site at Arisdale by townsfolk on Yell in memory of the crew of Catalina Z2148 killed whilst trying to land at Sullom Voe at night.  Only 3 survived the crash.  Photo: Dave Earl. 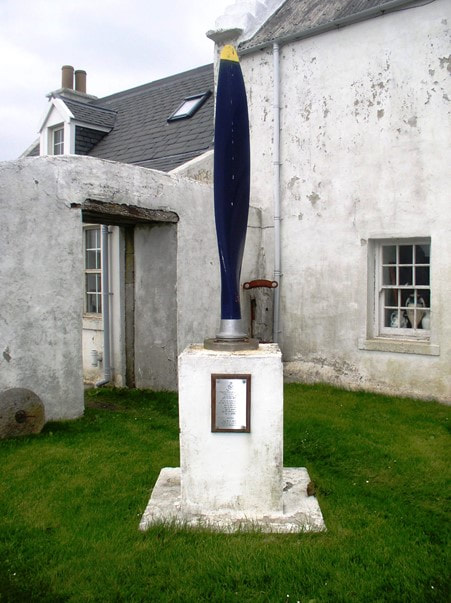 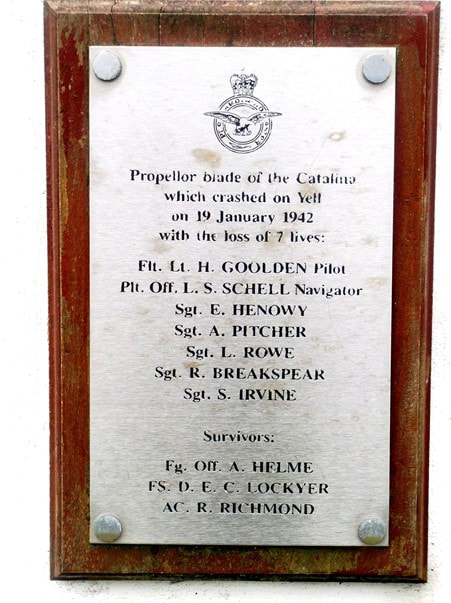 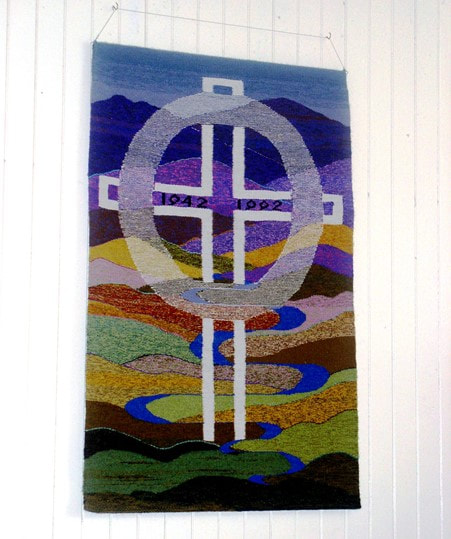 ​A beautiful tapestry made by the Co-Pilots wife Mrs Helme and donated to the church at Hamnavoe in memory of her husbands crew.  Photos: Dave Earl.
Memorial Bench for Beaufort L4514 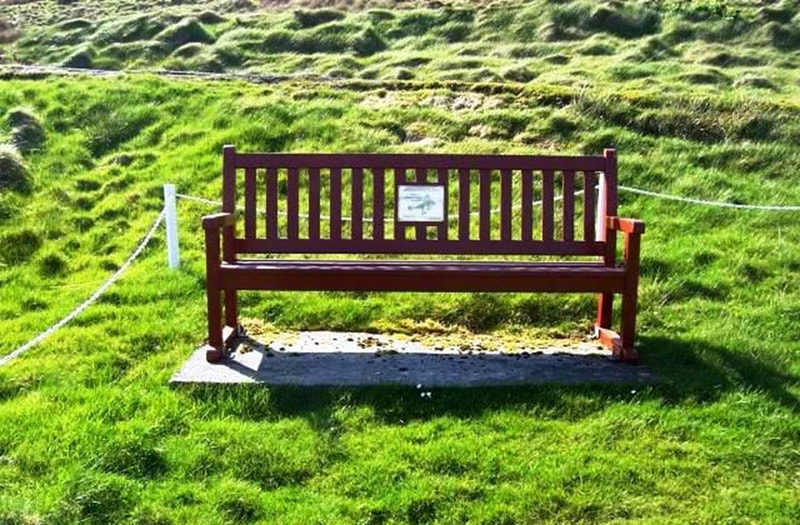 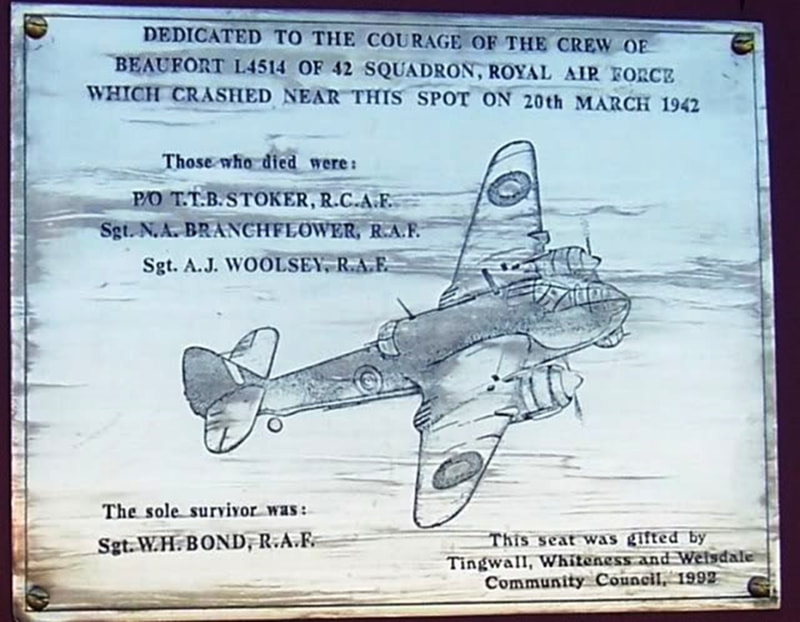 ​Above & Below:  A memorial bench & plaque at Dale Golf Course in memory of the Beaufort crew killed there when their aircraft crashed returning from an attempted shipping strike off the Norwegian coast.  Photo: Jeannie Via Shetlandpedia.
SULLOM VOE MEMORIAL, SHETLAND.
​ 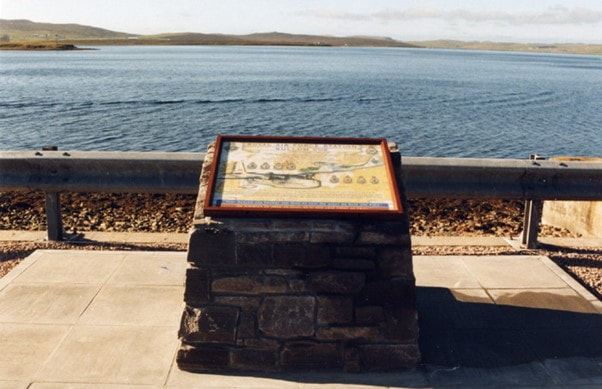 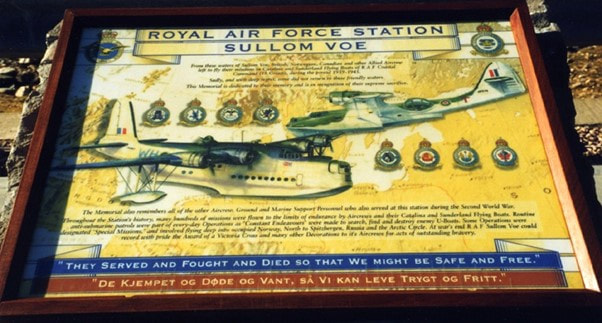 ​A couple of photos sent in anonymously of the impressive memorial to airmen who both served and those lost while serving with the flying boat squadrons at RAF Sullom Voe during World War Two.
ITALIAN PRISONERS OF WAR TRIBUTE AT SCATNESS ​ 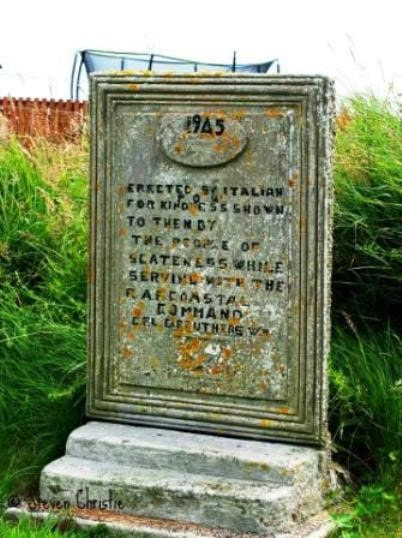 ​ Photo: Steven Christie.
An unusual token of appreciation erected in 1945 by Italian POW`Ss on nearby camp at Scatness states:
​
`ERECTED BY ITALIANS FOR KINDNESS SHOWN TO THEM BY THE PEOPLE OF SCATNESS, WHILE SERVING WITH THE RAF COASTAL COMMAND -CPL CARUTHERS Wm`.
(c)  Copyright 2020. Aviation Research Group of Orkney & Shetland.