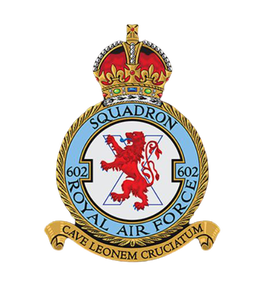 ​For a while this aircraft was a tricky one to trace for it is is listed as only having crashed at Basta Voe in January 1944, and the name of the pilot was given as Bruce Dumbels, no squadron was known, but  through searching various records of which squadrons were based in Shetland and Orkney at that time, and a little luck altering spellings of the pilots name, we finally tracked down some details.

The Spitfire a MK V  serial BL418 had been serving with 453 Squadron and had just taken up residence at Sumburgh on detachment from 602 squadron at Skeabrae. Whilst flying north the aircraft suffered an engine failure and the pilot, now known to have been P/O Bruce James Dumbrell RAAF, was forced to crash land on rough ground near Basta Voe,Yell, around 100 yards inshore. He was unhurt in the crash landing, but his aircraft was later deemed a write off. 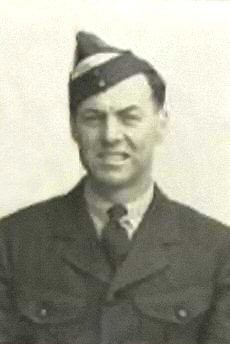 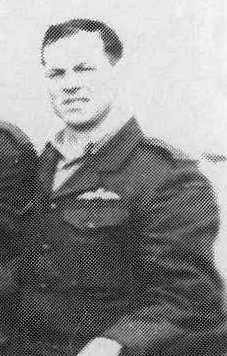 ​The  Spitfire was closely guarded by members of the Home Guard, that is until a salvage team arrived and proceeded to cut the aircraft up before it was taken away by sea. The compass from the Spitfire was given as a souvenir to Karl Brown and eventually in recent times has found its way into Andy Robertsons collection at the Cabin Museum at Vidlin.

It was first thought that the Spitfire had ditched off-shore, but an e-mail from a Colin Nicholson who`s father and others remembered the crash as schoolboys told another story. 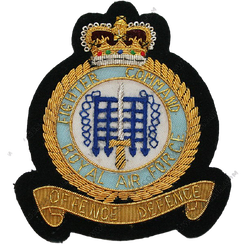 ​Based at RAF Sumburgh Shetland in early 1940 was a squadron of  Gloster Gladiator biplanes, though fast becoming outdated by the Hawker Hurricane, they were still in use here as the much needed Hurricanes were needed in the south of England.

On the afternoon of the 20 March around 15.40 hrs a Gladiator from Sumburgh Fighter Flight had been out searching for  an aircraft believe crashed some 15 miles from the drome,  but with nothing found the pilot Sgt A.E.Makins made his way back to the airfield.

The airfield at that time was still grass runways and whilst landing the Gladiator hit a cross-wind,touched down in a soft patch of ground and ballooned soon after crossing the road,in his attempt to recover the engine failed and he overran the drome, hit a bunker and overturned, fortunately the  pilot escaped unhurt but the aircraft was a total write off.
Miles Magister R1832.  248 Sq.   28.8.1940.   Nr Sumburgh.
​ 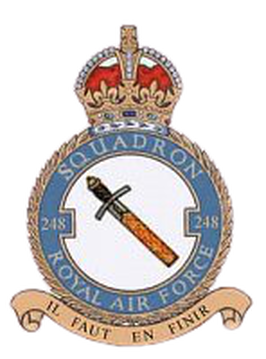 ​The Magister based at Sumburgh had taken off for what is described on the 1180 accident card as a Special Intruction flight, however the word `Aerobatics` is also on the card but this has been crossed out.

During low aerobatics and to the north of the airfield, the pilot struck the ground in a low shallow dive.from which no explanation is given only a theory that perhaps a slight  down daught could have caused the aircraft to fall so quickly, the Magister hit the ground and was totally written off killing the two crew. P/O Havilland was cremated at Aberdeen,and AC2 Moon was buried in Lerwick Cemetery,Shetland.

So far the exact location has not been found for this accident, but enquiries suggest somewhere near Scousburgh. Further investigations are needed. 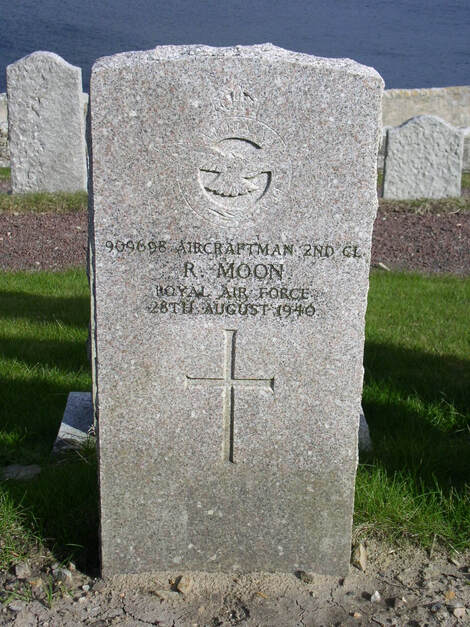 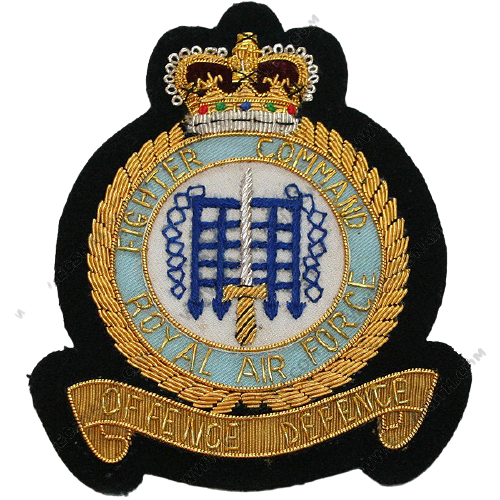 ​This Gladiator of Sumburgh Fighter Flight had ben on a routine patrol when it suffered an engine failure of the NE coast, the pilot in haste spotted a place to land and set the aircraft down on a beach in shallow water at Haroldswick,Unst, however before coming to a halt it hit a dip and flipped over, it is not certain how the pilot managed to free himself or whether he was helped by locals, but it would appear he was OK and lived to fly another day. 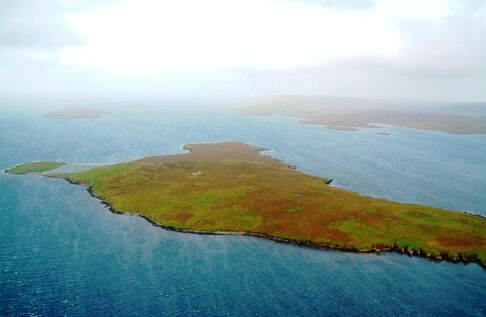 ​An aerial view of Samphrey Island off Mossbank in Shetlands NE mainland
Footnote:

Another Gladiator of SFF crash landed on Samphrey Island after engine trouble and overturned also in a boggy area, this is reputed to be N5642 which was S.o.C on 30/12/1941 piloted by P/O Winter. More info is needed on this aircraft and it is hoped ARGOS members up in Shetland will be able to locate the site if anything still remains. ​ 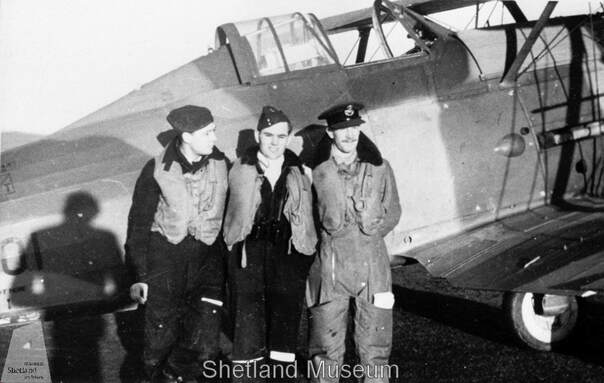 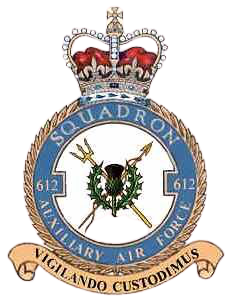 ​This Whitley had on 2 April 1943 been on an anti-sub patrol from 612 Squadron at RAF Wick in the Highlands, during the flight the pilot began to experience violent vibrations making the aircraft very difficult to control, they were over the ocean and in a desperate situation as they had no alternative but to either ditch or crash, fortunately the tiny isle of Foula west of Shetland presented itself and a crash-landing was made above a farm at South Biggins, as the name suggests this was in the south of the isle, and despite a slight back injury to the pilot, all the crew escaped unscathed, but the aircraft had broken in two aft of the radio compartment. 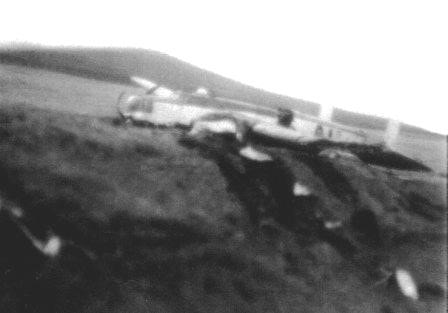 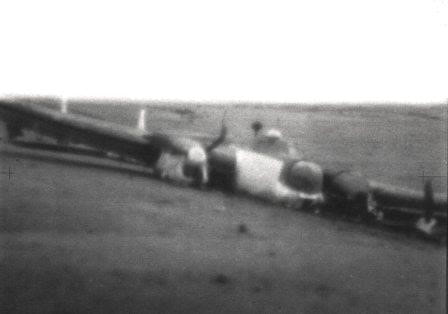 ​Above: Two pictures taken of the crashed Whitley by Eric Harrison the Navigator with the aircraft camera before they left the island on the 4th April.  Photos: Eric Harrison.

​The 6 crew stayed with locals on the Isle until being picked up by the Aith Lifeboat at taken to Scolloway, their aircraft was dismantled by 56 MU and removed by boat to the mainland, all the crew except 2/Pilot Bob Ordish survived the war.

Contact has been made with eye-witnesses also the Navigator and the crash site has been located by ARGOS members Dave Earl & Geoff Bland in May 2008. 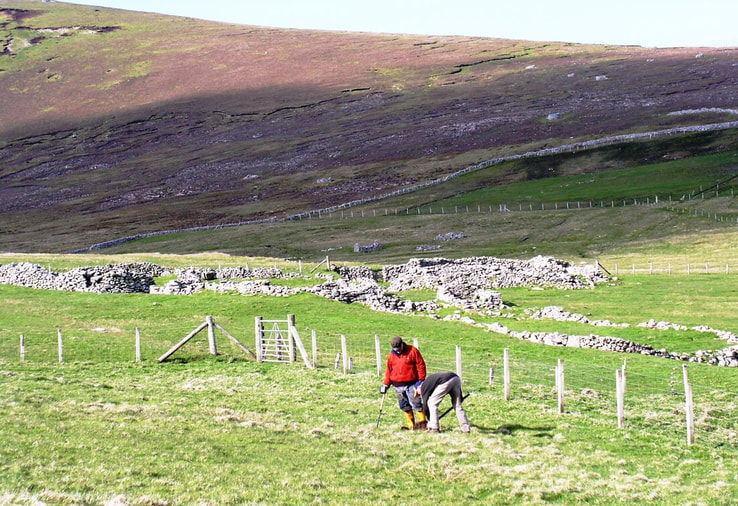 ​Above:  Geoff Bland and Eric Isbister looking for fragments at the Whitley crash site on Foula. Photo: Dave Earl. 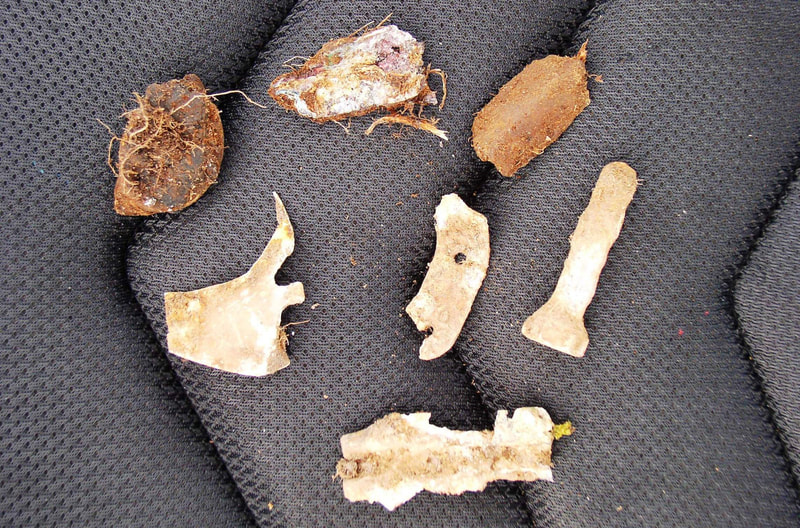 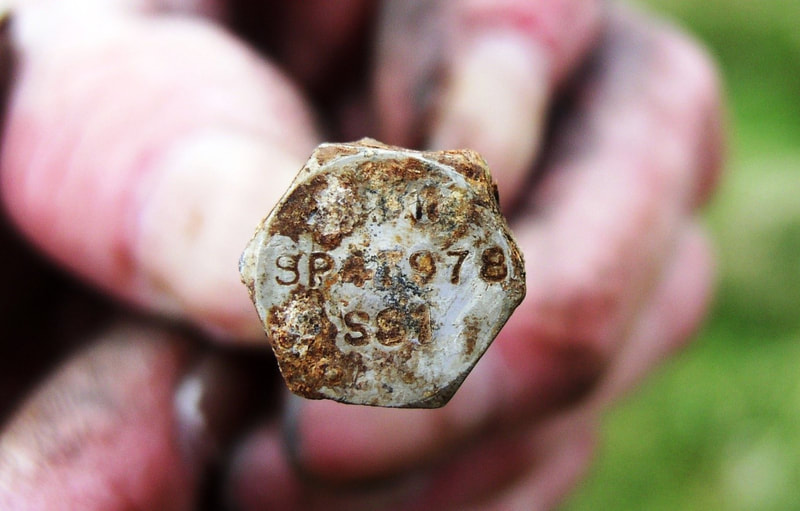 ​Above:  Just a few small fragments of alloy and one alloy bolt were all that were found at the crash site,the salvage team having been very thorough.  Fortunatly the bolt bore the part number beginning `SP` which confirmed it was a Whitley site.  Photo:  Dave Earl.