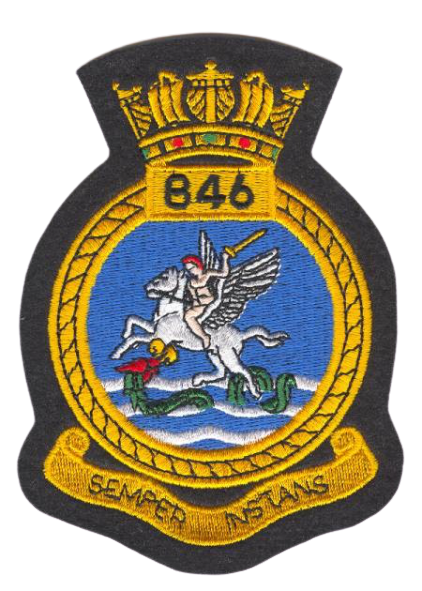 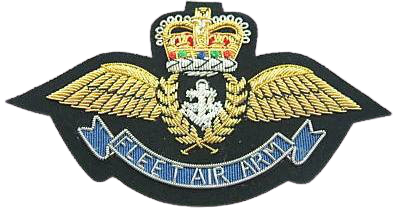 ​A/c was leaving carrier HMS Trumpeter in Scapa Flow on 2nd December 1944, for RNAS  Hatston, when during take-off the retaining ring of the booster on the catapult mechanism broke and the aircraft went over the port side. The Pilot was rescued but the aircraft sank in Scapa Flow and was classed cat. ZZ total write off and was not recovered.
.Pilot:  Sub/Lt  E.E.Ames. RN.
Grumman Wildcat FM-2 Mk VI Spec 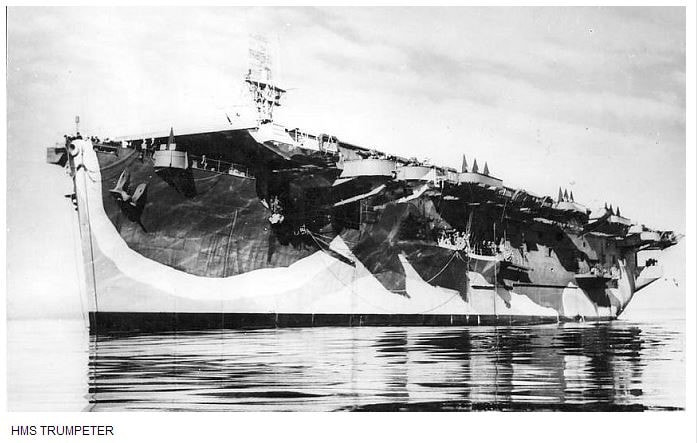 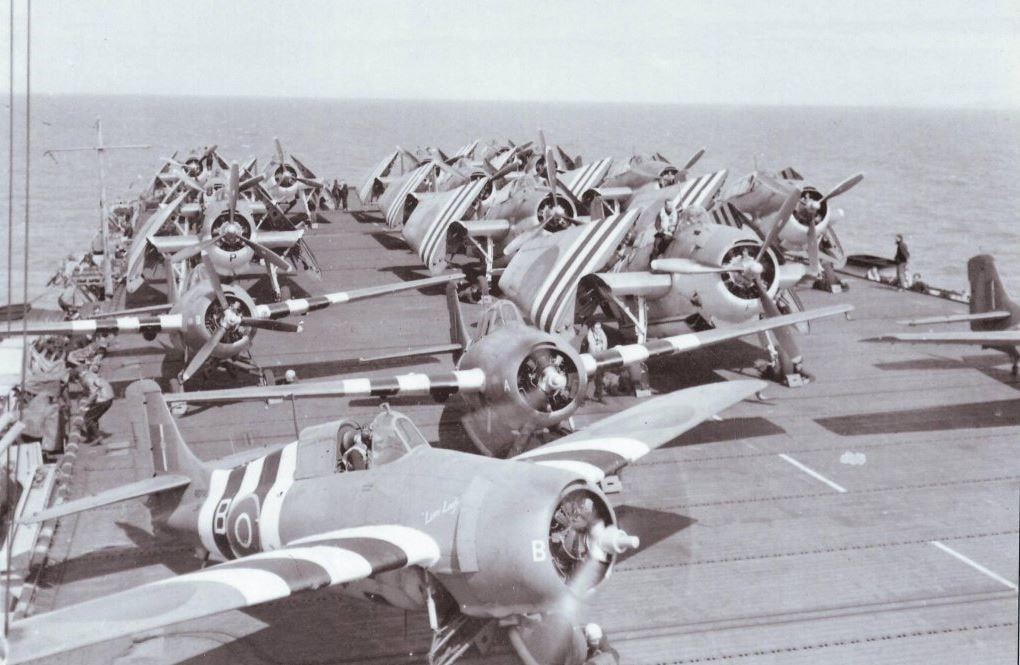 ​In the summer late summer of 2009, with the group still in its infancy, word got about of  our interest in wartime aircraft relics. We were contacted by a local   man who found a tail rudder of an aircraft ,a couple of decades ago,on Scapa pier where it had been dumped by a fisherman having been snagged in fishing gear. .  Members of the group visited his house and on closer inspection and after checking part numbers and diagrams,  the rudder almost certainly came from a Grumman Wildcat or Martlet. Although any aircraft wreck comes under the Protection of Military Remains Act, this recovery by pure accident can be justified. 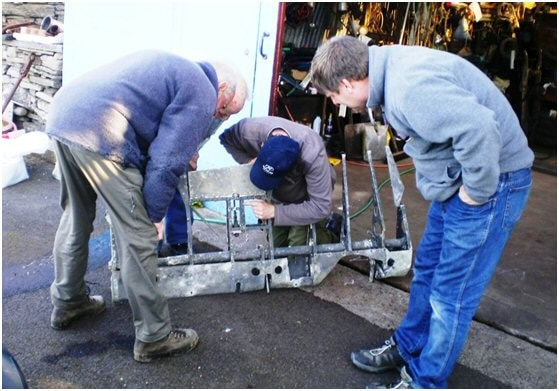 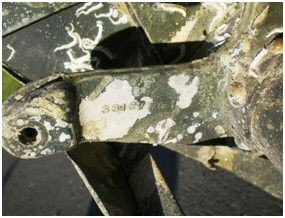 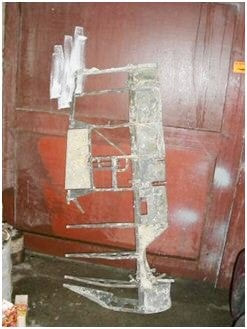 ​Records show only one Wildcat missing in Scapa Flow, JV751 from HMS Trumpeter.

First the ships log was obtained from the National Archives.

The log book shows on 2nd December 1944 that Trumpeter was at anchor at Berth B2, south of Cava. The wind was a fresh SW and HMS Trumpeter had dragged her anchor 100 meters to the NE. Two more shackles ( 1 shackle = 22.9m) of anchor chain were let out.
Together with the original anchor chain out the Carrier is now 280m to the NE of B2 anchoring point.

At 10.45 three Wildcat aircraft and two Avengers were launched to fly to Hatston but due to a catapult failure one Wildcat, JV751 fell over the port side into the sea. The pilot Sub/Lt  E.E.Ames. RN was rescued.

A WW2 chart of Scapa Flow showing the mooring positions was obtained form the United Kingdom Hydrographic Office at Taunton. This showed the location of B2 mooring.  The chart was geo referenced so it could be used with SonarWiz 5 software and then used as a basemap to plan the search.
​
A side scan sonar search conducted on 6th February 2014 by SULA Diving using a C-Max CM2 sonar in the area NE of Berth B2 where JV751 reportedly went over the side of HMS Trumpeter.

​Above. The sonar waterfall overlaid onto the WW2 chart, using SonarWiz 5 showing the position of B2 anchoring point and a contact 280m away from B2 . 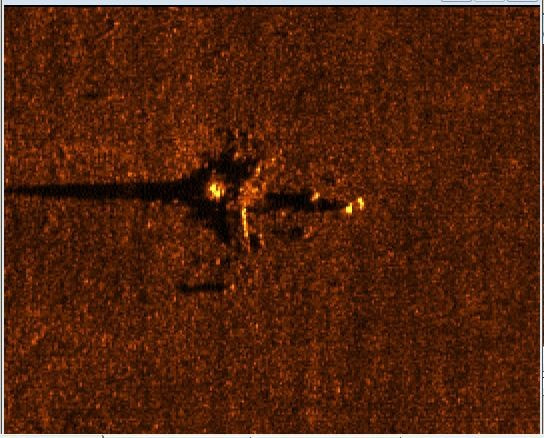 ​
On Monday 10th March 2014, the wreck of the Wildcat was finally confirmed by SULA Diving from Stromness and ARGOS Member Kevin Heath.  Brett Green using a Seabotix LBV ROV searched the sea bed in the area of the sonar contact and soon pictures and video were fed back to the monitor on the boat of the shattered aircraft.
It would appear that soon after hitting the sea surface the propeller was torn off, the Wildcat flipped and travelled on coming to rest inverted. Instantly recognisable are the wing sections, the wheels with tyres and the Wright R 1820-56W  radial engine.  The wreckage lies in approx. 35 meters of water and the images below are from the video taken by the ROV. 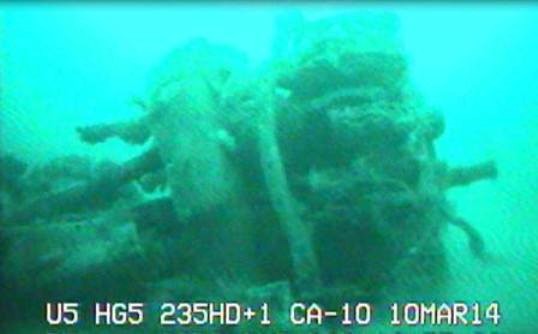 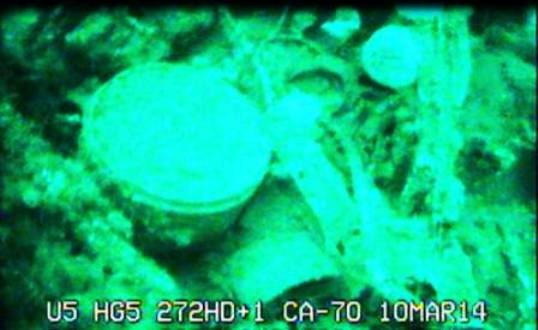 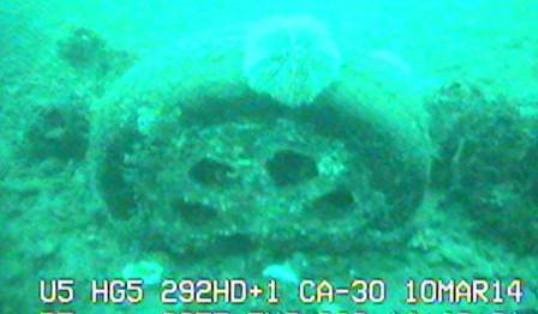 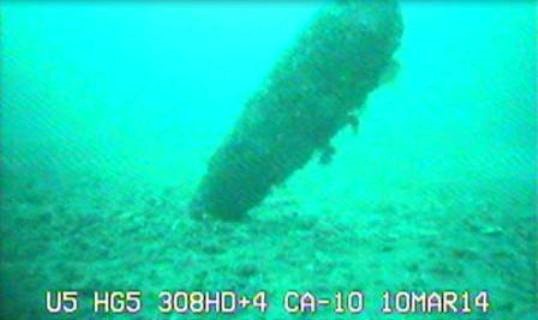 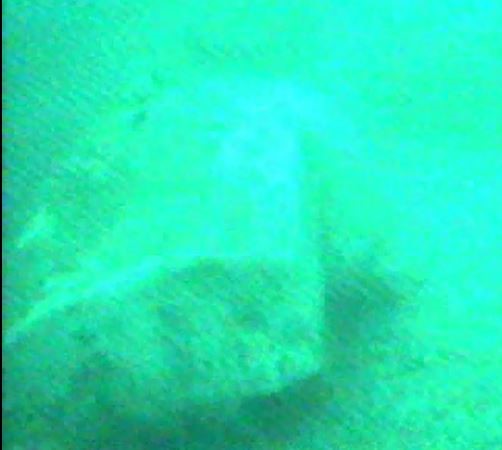 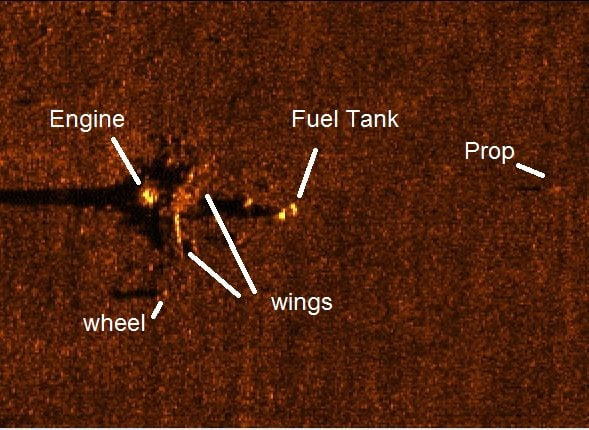 ​Above:  General layout of wreckage after survey with ROV.

​Photo: Kevin Heath & SULA Diving
Wayne Allan and Rob Baxandall were the first to dive the Wildcat off the MV Valkyrie. 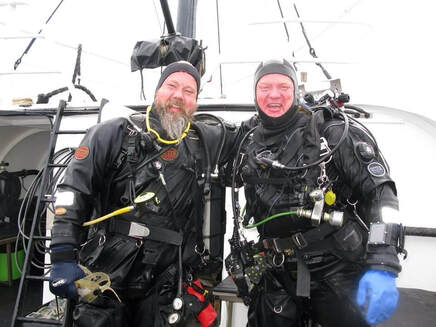 ​Rob and Wayne on MV Valkyrie after the dive on the Wildcat
Photographs by Bob Anderson.
Below are a series of fantastic photos by Bob Anderson, skipper of the MV Clasina. 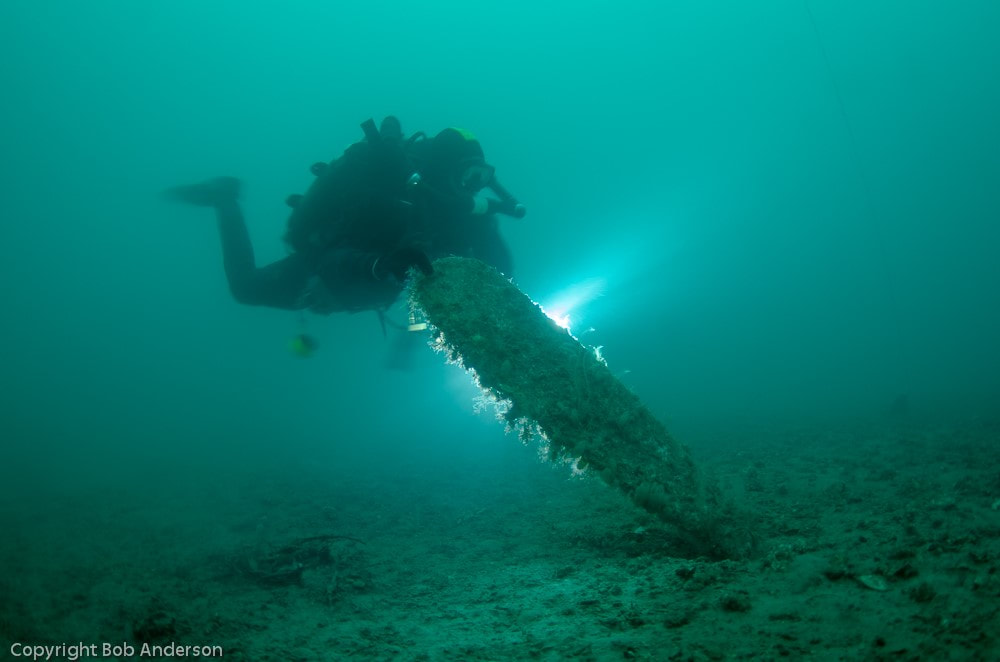 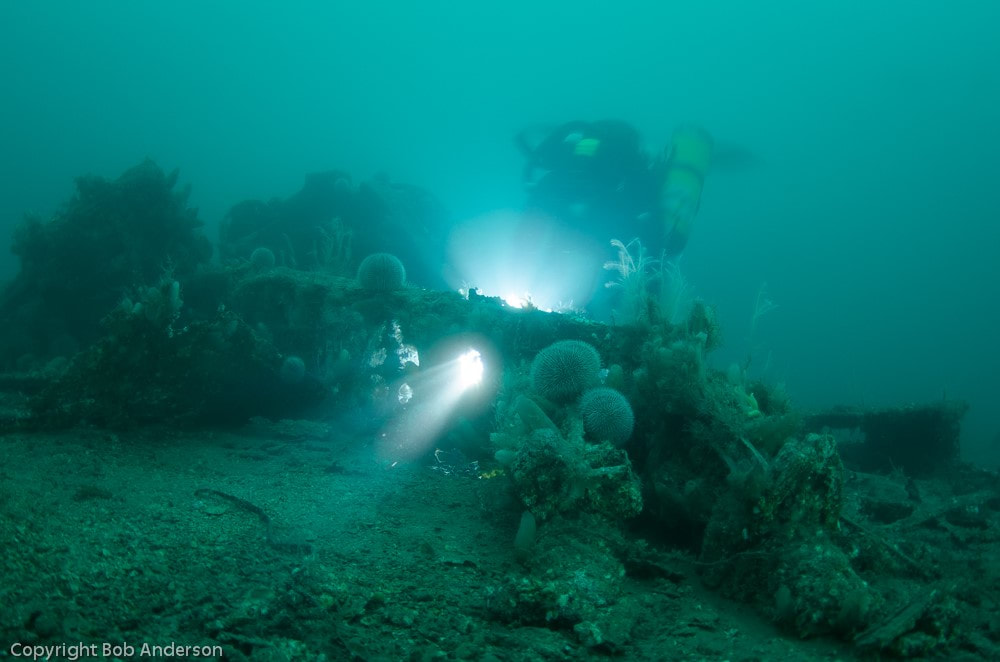 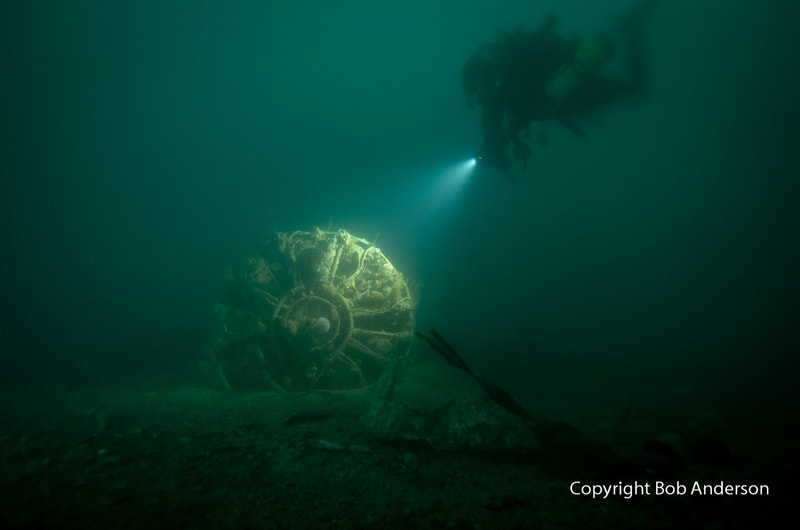 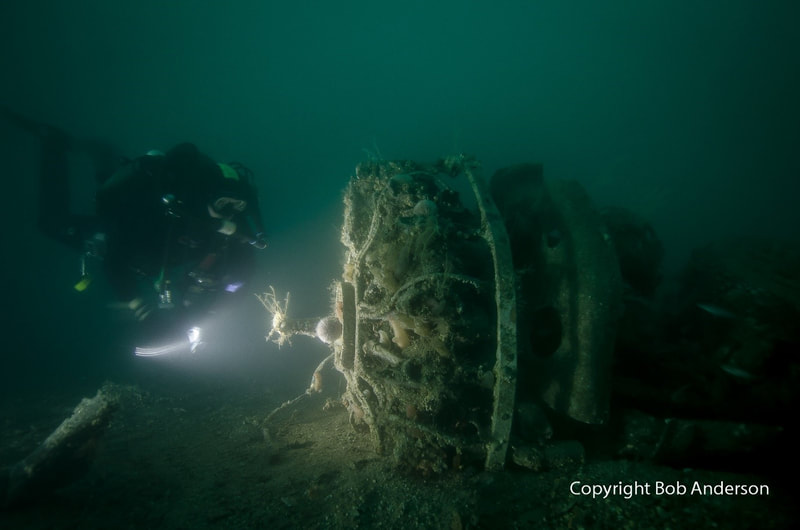 PLEASE NOTE:   Just a reminder that the wreck has been reported to the authorities and a licence will be applied  for with the MoD to investigate further. All the wreckage comes under the Protection of Military Remains Act and should not be tampered with.  A copy of which can be found via the link below:
​
http://www.legislation.gov.uk/ukpga/1986/35
​
​(c)  Copyright 2020. Aviation Research Group of Orkney & Shetland.