CRASHSITEORKNEY
The history of Civil Aviation in the Orkney Islands

​THE PIONEERS OF CIVIL AVIATION IN ORKNEY
​Captain Ernest Edmund `Ted` Fresson is known today as the forerunner for Civil aviation in Orkney, Ted  had become interested in aeroplanes at an early age and had learned to fly in Canada and America prior to the First World War and during the latter flew anti-submarine missions from England.


After WW1 Ted Fresson  returned to China where he had once worked in the tea trade, here he now became a flying instructor and became also involved with aircraft construction. 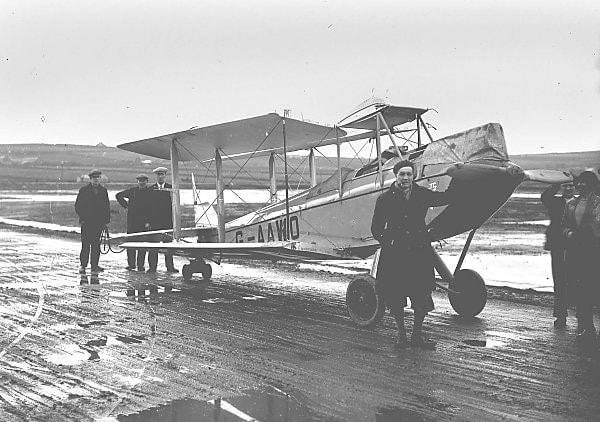 ​Above:  Fresson`s DH-60 Moth in Kirkwall.  Photo: Orkney Library Photo Archive.
​In 1928 he returned to England and set up a business for pleasure flights around the British Isles, but had bigger ideas and in April 1931 made a succesful flight from Scotland to Kirkwall in his DH-60G Moth G-AAWO along with a passenger Miss Helen Pauer, the purpose of the flight being to find a suitable landing place for an airfield for running pleasure flights in the Summer months, The aircraft landed in a field near Balfour Hospital, close to the Scapa Pier road. 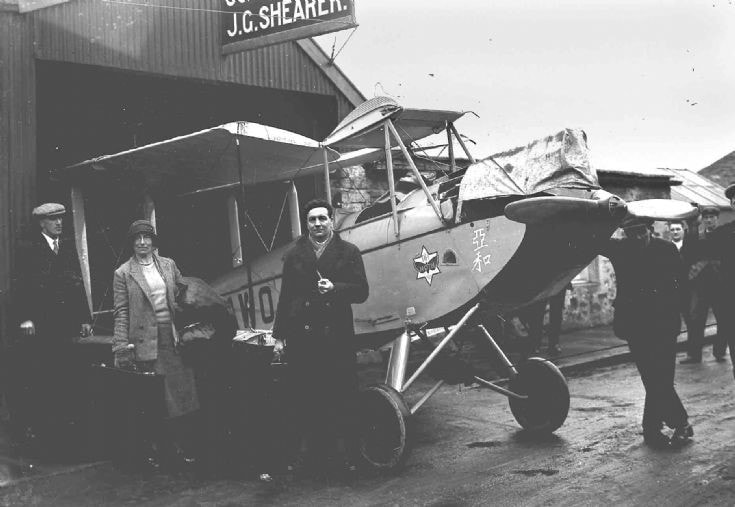 ​Above:  Fresson & Miss Pauer at the shed of J.G.Shearer on Castle Street, Kirkwall in 1932.  Photo: Orkney Library Photo Archive.
​On 22nd August 1931  Fresson made another flight to Orkney in an AVRO 504  G-EBGZ and landed in a field off the Deerness Rd, Kirkwall and interest was shown by James Mackintosh the owner of the `Orcadian` who wrote a number of articles in the newspaper describing these pioneering flights.
In February 1932  Fresson again in the  DH60 flew back to Orkney and landed the aircraft in a field near the Peedie Sea, it was then towed with folded wings to the Coal Mercheant J.G.Shearer`s shed where it was stored prior to a return flight and talks with local backers for a scheduled service to operate from Inverness  to Kirkwall. 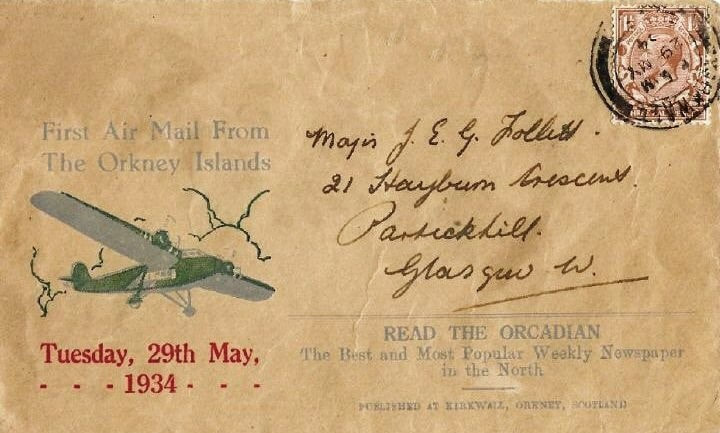 ​Above:  FDC  Commemorates the First Air Mail from Orkney in 1934. 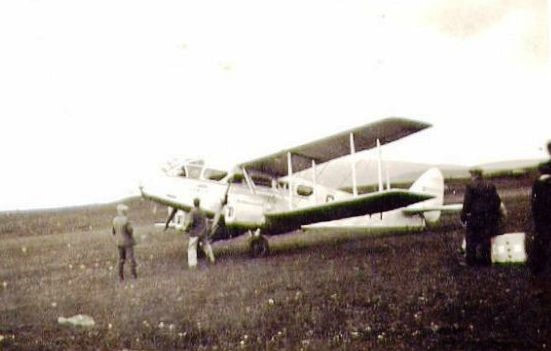 LONGHOPE WHIRLYBIRD OF 1964
​
​Beryl Gillespie-Simpson sent us these great photos from one of her family albums of a Bell 47 Helicopter G-ARIA  that landed at Longhope in July 1964. Her captions are given below the pictures. Thanks Beryl. 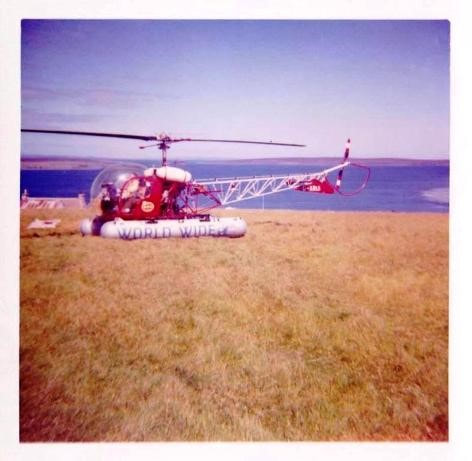 ​This was when they were laying new water pipes at Hogglins Water. My mum had to lay out a white sheet up above our house so that the pilot knew where to land, it can be seen in the photo.
As a treat for my brother Mervyn's 10th birthday the pilot Neville Mount took us both a trip around Flotta and Longhope Bay. We were great fans of the TV programme Whirleybirds so it was some treat! - at Up in the field above North Row.  Photo: Beryl Gillespie-Simpson 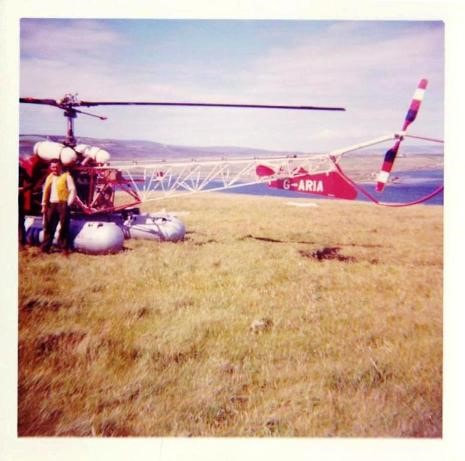 ​Longhope July 1964.
Bill Irvine standing in front of the helicopter. - at Up in the field above North Row. Photo: Beryl Gillespie-Simpson. 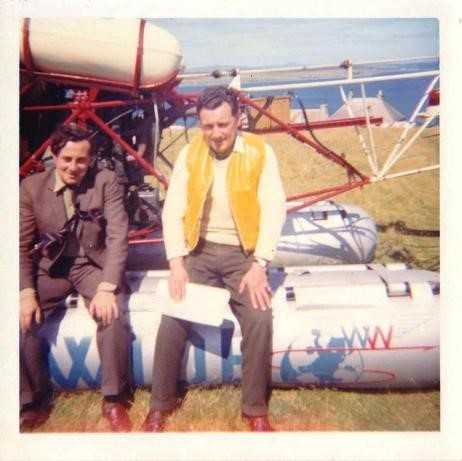 ​Neville Mount the pilot on the left and Bill Irvine water board manager from Kirkwall must have been ex service man what a seam was always in his breeks and he polished his shoes every morning in the back porch of our house. I remember it as if it were yesterday and I was just 13. - at Field above North Row. Photo:  Beryl Gillespie-Simpson. 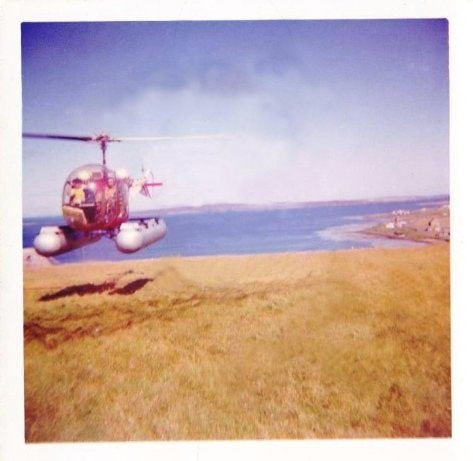 ​Lift off :
And up it goes! Some bad bairn has scribbled on the photo. - at Up in the field above North Row. Photo: Beryl Gillespie-Simpson
THE FIRST CIVIL AIRLINE LANDING AT LONGHOPE
​
​This photo appeared in the Orcadian sometime in the late 1960s or early 1970s, the clipping was found by Beryl Gillespi-Simpson. The article that appeared with the photo is below the picture. If anyone remembers the date please get in touch..The aircraft was a Loganair Norden Islander. 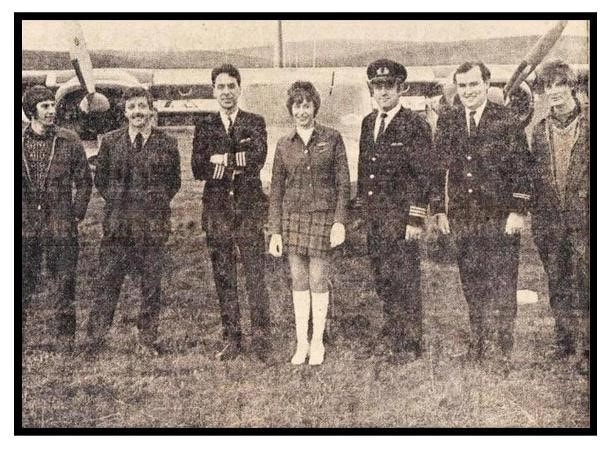 ​Staff of Loganair at Longhope.  Photo:  The Orcadian. 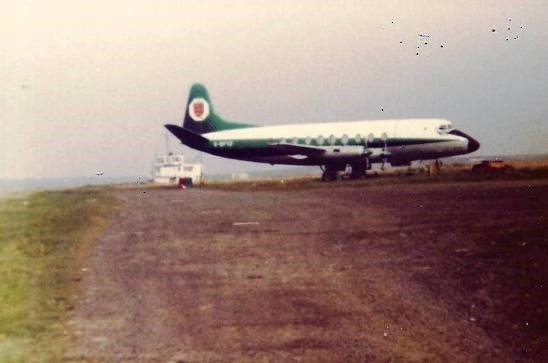 ​This Viscount formally operated by Guernsey Airlines and Alidair, became a charter aircraft for the oil industry in the 1970s. The aircraft suffered a landing accident at Kirkwall on the 25th October 1979, though fortunately there were no serious injuries to the 51 crew and passengers on board.   Photo: Julie Rickards.
​BRITTEN-NORMAN BN-2A ISLANDER G-BFCX  ACCIDENT ON ROUSAY. 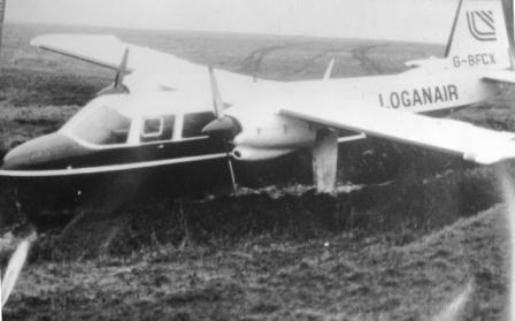 ​A forced landing on Rousay in February 1980 resulted in the aircraft ending up in a ditch, however both .the pilot and passengers escaped injuries and were taken off the isle by ferry. The aircraft only suffered minor damage and with the aid of a Sikorsky S-61 helicopter  G-BDIJ, the Islander was airlifted to Kirkwall for repairs and flew again   Photo:  Tom Gibson.