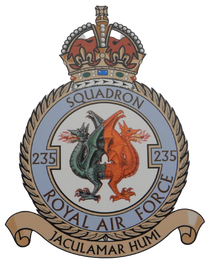 ​Having taken off from 235 Sq base at Sumburgh at 22.00 hrs for a night reconnaissance flight off Faeroe Islands, at 02.45 a radio message was picked up from the pilot saying that some of the instruments had failed and they were unsure of their position, a short while later at approx 03.05 hrs the Blenheim crashed into a small hill  and burst into flames killing all 3 crew members, it is assumed that the crew had dropped below cloud trying to locate their position. 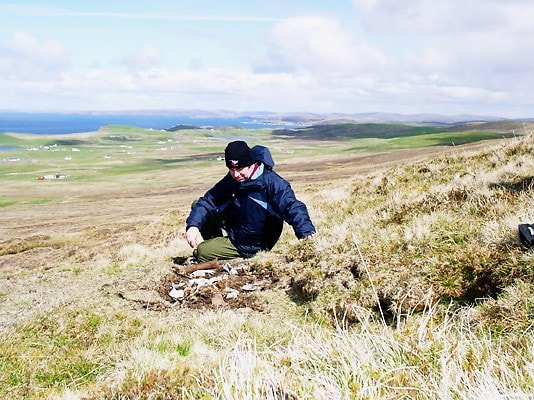 ​A visit to the crash site in May 2007 revealed some small pieces of wreckage, in the main alloy and some exploded  rounds of .303 ammo.   All the 3 crew were buried with full military honours in Lerwick Cemetery, Shetland. F/Lt Hammond was a New Zealander from Wellington, serving with the RAF. Crew:  Photo: Dave Earl.
​Pilot.      F/Lt Howard M.Hammond. RAF. NZ. 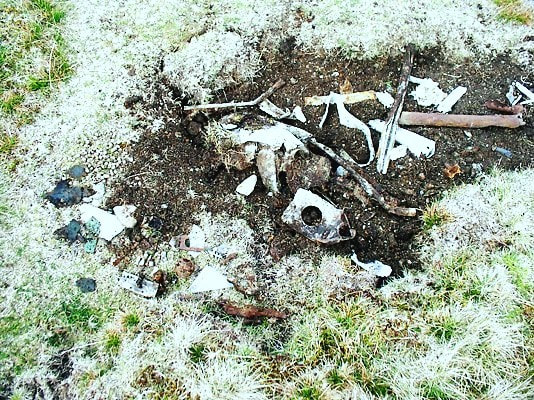 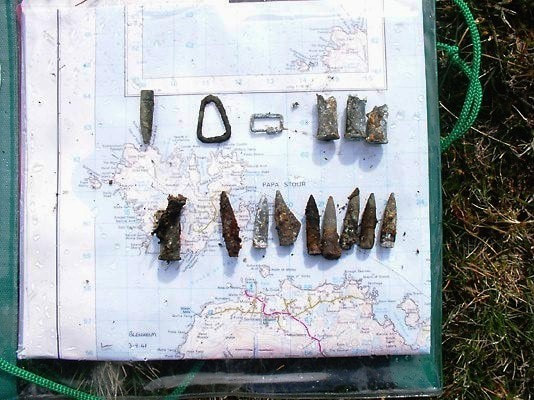 Above: ​Sparse remains of the Blenheim in 2007.  Photos: Dave Earl. 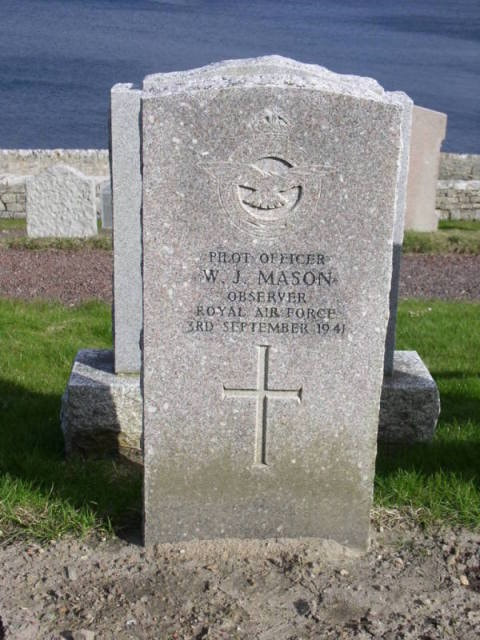 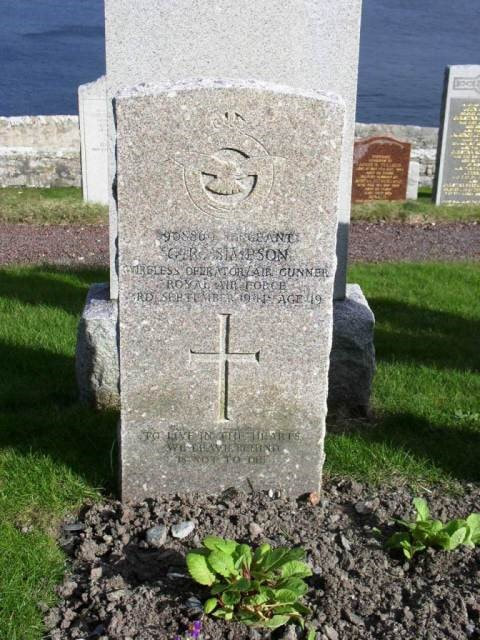 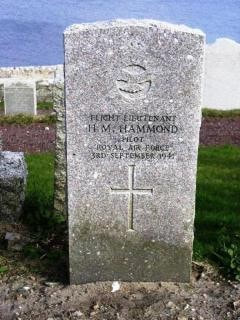 ​The headstones of the 3 airmen in Lerwick Cemetery.  Photos: Dave Earl. 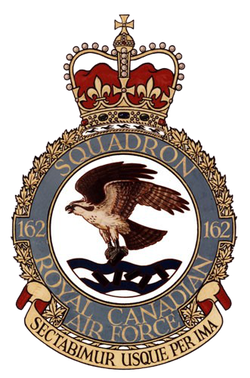 ​The Canso had taken off  to patrol the waters of the North Atlantic for any U-boats, after around 12 hours and with the weather closing in the Canso set a course for base but Wick having been shut down due to bad visibility the crew were ordered to divert to Stornoway on the Isle of Lewis, a South Westerly course was set but perhaps due to wind drift they were slightly off course and at too low a height to clear the high ground of Hamnafield on Foula.

At approximately 19.30 hours the aircraft in low cloud struck the hillside around 50 feet from the top and exploded killing all but one, F/Sgt Knight who was thrown through one of the gun blisters breaking his pelvis and suffering severe burns. 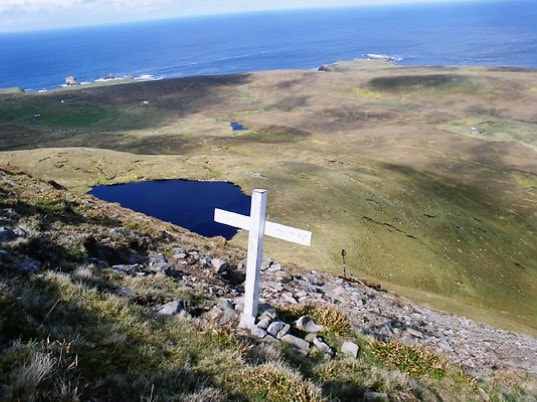 ​This cross in memory of the seven Canadian airmen who lost their lives was placed by Steve Smith, a former Foula resident.   Photo: Dave Earl. 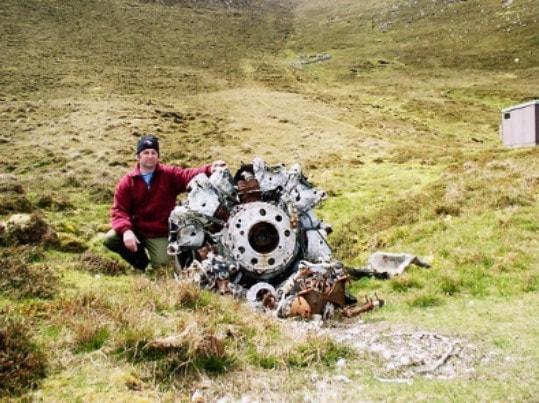 ​With one of the P&W radial engines from Canso 11062 on Foula.     Photo: Dave Earl.
Local men Davie Gear, Andrew Manson, John Henry and several others rushed up the hill with ammunition exploding in all directions to help and on an improvised stretcher brought Sgt Knight down the hill and as the Island nurse was away,two sisters Babbie Henry and Betty Umphray did what they could to make him comfortable until he could be collected and moved to the hospital in Lerwick. Those that died were buried in Lerwick Cemetery with full military honours.
Crew of the Canso were: 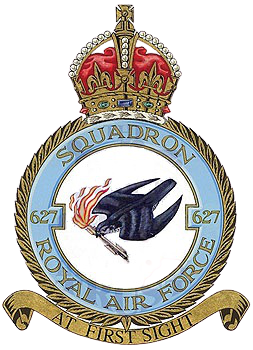 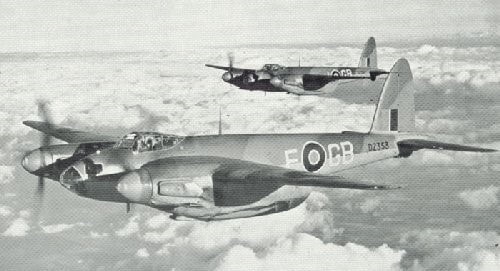 The Mosquito was one of 3 sent to lay target markers for a squadron of Lancasters that were to bomb U-boat pens at Trondheim, the Mossies had flown from Woodhall Spa to Lossiemouth then after re-fueling they were off to Norway, however for reasons unclear DZ642 did not have its tanks topped up and this would be a contributory factor in its eventual loss later on.

The flight to Norway went without episode but on arrival at Trondheim the target was obscured by smoke screen and so had to be aborted and the aircraft turned for home. By this time DZ642 was having problems with radio transmissions and the two other Mossies had to relay messages, also fuel was now noticed to be very low and so a diversion was made to Shetland with hope of landing at Sumburgh, the Air Sea Rescue were notified at Lerwick just in case they had to ditch, when the other aircraft turned for Peterhead, DZ642 tried to make contact  with Sumburgh but reception was very poor and last message was that they were on a heading of 230 degrees, the other two Mossie pilots had heard Sumburgh warning DZ642 that there was high ground in the area of up to 1,000 feet, but this was not acknowledged.
​The airwaves eventually went dead and no trace was seen of the Mosquito at Sumburgh or at sea, It was not until 15 days later that 3 shepherds working on Royl Field Hill spotted the wreckage of the aircraft and the two bodies of the Pilot and Navigator, at an investigation by the RAF later  it was established that fuel tanks had expired and that the pilot was trying to crashland on the nearest piece of what looked to be flat ground and the aircraft broke up. 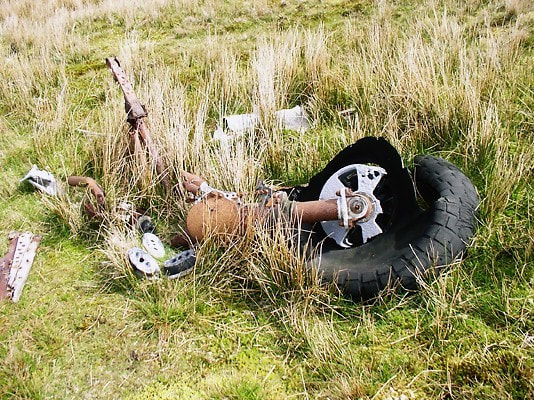 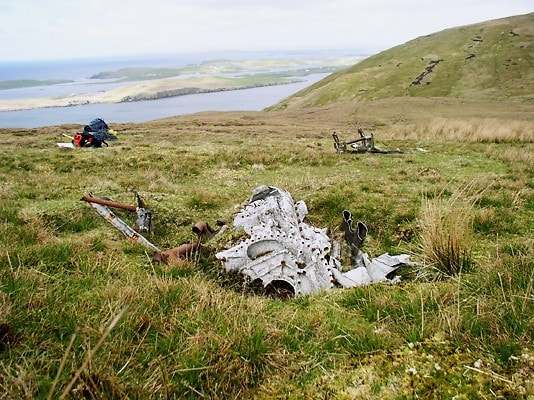